Who Is at Fault in a Sideswipe Accident?

Proving fault in a sideswipe accident isn’t always clear-cut, even if it’s obvious who sideswiped who.

Determining who sideswiped who isn’t always easy, and even when it is clear, fault in a sideswipe accident may not all fall on one driver.

Sideswipe accidents can be caused by:

Drivers can avoid being at fault in a sideswipe accident by following driving rules and laws, paying attention to the road and knowing what to do if someone sideswipes them.

What Is a Sideswipe Collision?

The National Highway Transportation Safety Administration (NHTSA) defines a sideswipe accident as one in which “the sides of both vehicles sustain minimal engagements.” In other words, when one car scrapes along the side of another.

The most common type is when one vehicle enters a lane that another one is already using while both are going in the same direction. It can also happen when a driver sideswipes a parked car, or two cars going in opposite directions drift into each other.

The majority of sideswipe accidents result in property damage accidents with no injuries. Only 2.7% are the first “harmful event” in a fatal accident.

Sideswipe accidents are almost always preventable, caused by either one or both drivers simply not paying enough attention. They’re considered one of the least serious types crashes, but those scrapes and dents can end up being expensive, particularly if fault is in question.

How to Tell Who Sideswiped Who

Fault may seem obvious in a sideswipe accident – one car entered another car’s lane. Lack of attention is a big factor, because most drivers wouldn’t choose to enter space that another car is already occupying. Another frequent cause is a distracted driver drifting or swerving into another lane without realizing it.

But even in seemingly obvious cases, the driver who was swiped can be considered partially at fault if they were on the phone, speeding, or doing something else that made it harder to notice, or get out of the way of, the other car.

Drivers who deliberately don’t allow another driver to make a lane change, speeding up or slowing down to block them, also can be at fault.

Almost all states – 46 – have some form of comparative negligence, which means a defendant can argue the other driver also had some fault. Of these, 12 are no-fault, which means each driver is responsible for his/her own damages. The other 34 have different rules for how fault is divided.

The four remaining states – Alabama, Maryland, North Carolina and Virginia, as well as Washington, D.C. – have contributory negligence laws, which means that the other driver can’t collect damages if the defendant can prove the other driver had any fault at all.

Fault is obvious in some sideswipe accidents, but in a lot of cases it can be hard to determine. Who sideswiped who is often just a starting point.

Let’s take a look at some of the most common sideswipe accident scenarios and how fault is determined.

The majority of sideswipe accidents happen during a lane change. The driver who’s changing lanes is usually considered at fault if they don’t use a turn signal, don’t check to make sure there’s room to enter, or even if they don’t see a car in the lane because of a blind spot, or because their car is big and the other one is little. The person already in the lane has the right of way, so it’s the obligation of the driver who is changing lanes to make sure he can do it safely.

But the driver with the right of way may also be at fault if he’s too distracted to notice someone is entering his lane, or if he speeds up or slows down in a way that gets in the way of the entering car.

A less clear scenario is that when two cars on the outside lanes of a three-lane highway both move into the middle lane at the same time. If this results in a sideswipe accident, since neither driver had the right of way and assuming both were using turn signals, they may both be at fault. Drivers are expected to check what’s going on in all lanes of traffic before making a move, yet both failed to notice the other.

If one was being negligent in some way – not using a turn signal, speeding, or doing something else to make the other driver react in time, the negligent driver would be more likely to be at fault.

Merging onto the Highway

The cars that are already on the highway have the right of way, so if a driver is merging from an entrance ramp, he must yield to traffic. If a sideswipe accident happens while a car is entering a highway, usually the merging driver is at fault.

If the cars are on the highway and must merge because of a lane reduction, the car in the lane the other must merge into has the right of way. In the case of sideswipe, the merging driver would be at fault.

But the driver with the right of way is also obligated to not block someone from merging or do anything reckless or aggressive. If his actions cause the sideswipe, he may be at fault.

Distracted driving is any behavior that takes the driver’s attention away from the road. The list of distractions is endless:

Distracted driving is a motor vehicle offense in 48 states. Some states specifically cite cellphone use, some are more general. Drivers are expected to give all their attention to the road.

Some 5.9% of fatal accidents are caused by distracted driving. It’s also a major cause of sideswipe accidents, usually because the distracted driver swerves into the other lane without realizing it.

A distracted driver can be at fault for causing a sideswipe accident or can be partially at fault if another driver causes the accident. If a distraction keeps you from reacting to another driver’s bad driving, then a case can be made for you being at fault.

Driving while intoxicated, road rage, distracted driving and speeding are not only reckless, they violate motor vehicle law. Recklessness can also include things like falling asleep while driving, or driving with bald tires.

Drivers are obligated to drive safely. If someone causes a sideswipe accident because of reckless driving, they will most likely be considered at fault.

Speeding is a factor in more than a third of all car accidents. It’s harder to control a car when driving at higher speeds, and it’s also harder to react to other cars and obstacles in the road. When a speeding driver swerves because he/she doesn’t have time to brake or can’t control the car, it can easily cause a sideswipe accident to whoever happens to be in the next lane.

Road racing, which is against the law on public roads and highways, involves two cars speeding next to each other. Road racing accidents involving both cars are often sideswipe accidents and can be serious because of the speed involved.

Drivers whose speeding results in a sideswipe accident will be considered at fault.

Hydroplaning on a Slippery Road

Hydroplaning is usually caused by driving too fast. Drivers are expected to slow down when roads are slick. The same is true for sliding on a snowy or icy road.

Slick roads and speed are a recipe for sideswipe accidents, because the driver can’t control where the car is going and the car will rarely go straight. While it’s easy to blame the weather, drivers who cause an accident by hydroplaning are considered at fault.

What to do After a Sideswipe Accident

Even if no one is injured, drivers should report a sideswipe accident to police, even it results in just scrapes and dents. Most states require police be called if a certain amount of damage is sustained in an accident. The thresholds are low, ranging from $300 to $1,000 for most states.

When in doubt, call the police. If an officer doesn’t come to the scene, go to the police department to make a report. Don’t let the other driver, particularly if they are at fault, talk you into not calling the police if there is damage to your car.

It doesn’t take much damage to a vehicle to bring the cost into four figures. Injuries, too, can show up later, once the adrenaline wears off. Insurance companies require a police report if you’re making an accident claim.

As with any accident, at the scene you should:

Fault in a sideswipe accident is often hard to determine. If you feel the other driver was at fault, but the insurance companies aren’t convinced, or you are being accused of being at fault when you don’t believe you were, get help from an attorney who specializes in car accidents.

Attorneys have resources to investigate accidents, call in experts and more. Most attorneys won’t charge until you get a car accident settlement. 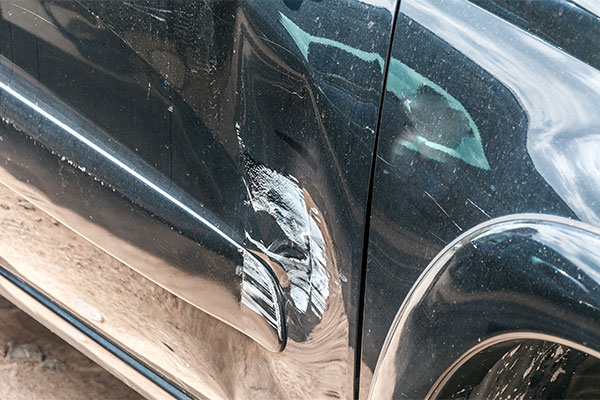 Home » Car Accident » Fault » Who Is at Fault in a Sideswipe Accident?