What Does Contributory Negligence Mean?

Contributory negligence, the rule of law in four states, is tough on plaintiffs in personal injury lawsuits. Plaintiffs can’t collect damages for their injuries if the defendant can prove that the plaintiff was in any way negligent.

There are four U.S. states in which the plaintiff may not be able to recover damages if they, too, were negligent in any way. That is true even in a car accident caused by one driver’s blatant recklessness or disregard for the law.

Contributory negligence is a legal defense that allows a defendant to avoid paying damages if the injured party was in any way – even only 1% – responsible for the harm that resulted from the accident.

That’s good news for defendants, and bad news for plaintiffs.

The plaintiff doesn’t have to break the law, they must be found negligent by the court.

There are a few exceptions, though, which makes contributory negligence not a total brick wall for a plaintiff.

Let’s look at contributory negligence, how it works in car accident lawsuits and how it’s different from comparative negligence.

What Is Contributory Negligence?

Contributory negligence is a legal defense in which the person considered at fault is not liable for damages if the plaintiff – the person injured – is determined to have been even a tiny bit negligent. Even if one person is 99% at fault and the other is 1% at fault, in contributory negligence states, the defendant can argue that they’re not liable for damages because of the plaintiff’s negligence.

At one time, all states followed the contributory negligence rule. But over time, most states switched to comparative negligence, which weighs the percentage of liability each party has.

There are exceptions to the law.

In Alabama, children under 14 and people lacking mental competence are considered incapable of contributory negligence.

In all the examples, contributory negligence doesn’t mean the penalties for any laws broken are less or excused. It means that the injured party can’t seek damages in a lawsuit.

How to Prove Contributory Negligence

It’s to a defendant’s advantage to be able to prove contributory negligence in the four states that recognize it. A personal injury lawsuit can be expensive, so not having to pay damages is a huge win.

To prove contributory negligence, a defendant must be able to show that the injured person:

While that may seem like a lot to prove, all it takes in contributory negligence states, is a smidgen of fault – 1% – for the defendant not to be liable.

The defendant’s attorney can scour police reports, take witness statements, do a scene investigation, even probe the plaintiff’s personal life – any of these may have one detail that can show the plaintiff had some fault in the accident.

A plaintiff in a contributory negligence state does have one card to play if the defendant is arguing they are partially at fault. They can argue “last clear chance” doctrine, claiming the defendant could have prevented the harm through reasonable means, but didn’t.

Take the example of the intoxicated driver hitting the pedestrian. Let’s say the pedestrian was crossing an empty, straight street on a bright sunny day. Even though they weren’t in a crosswalk, they easily could be seen, and were almost across the street when they were hit. In fact, they were trying to get out of the way of the car, sprinting toward the curb, but the intoxicated driver swerved and hit them.

The plaintiff’s attorney can argue that the driver had the last clear chance to avoid the accident but didn’t.

Determining fault isn’t always as clear-cut as it is in these examples, which means it’s a good idea to have an attorney if you’re involved in a personal injury accident in a contributory negligence state, no matter if you’re the defendant or the plaintiff. Actually, it’s a good idea no matter what state you live in.

Courts have found over the years that the contributory negligence is hard on plaintiffs, who may have suffered greatly. Therefore, most states follow some version of comparative negligence instead.

Comparative negligence determines the percentage of fault for all involved, and assigns damages based on it. Unlike contributory negligence, a plaintiff with some level of fault can still recover damages.

“Comparative negligence is the determination that more than one party is negligent, which requires that each party’s percentage of fault must be made by the jury by comparing both,” Bronsnick said. “The jury attributes the percentage of negligence for each party, with the total amount of 100%.”

In 13 states, the rule is “pure” comparative negligence, in which damages are assigned based on percentage of liability, no matter what it is. That means one party may be able to recover 80% damages, and the other 20%. In the extreme case of the 99% at fault person, they could still recover 1% in damages in these states, while the plaintiff is awarded 99%.

Bronsnick’s state, New Jersey, is a “51% state.” Someone who’s more than 51% or more at fault can’t recover damages.

“The plaintiff’s negligence cannot exceed that of the other party,” Bronsnick said. “For example, if a jury determines that the plaintiff and defendant are each 50% negligent, the plaintiff is entitled to recover the value of the case, reduced by 50%.”

Other states have a 50% cap, which means the plaintiff must be less than 50% liable to recover damages.

As with most other laws, each state has its own variations. While many states assign the monetary amount of damages based on the percentage of fault, some don’t. For instance, in Maine, a 50% state, the jury can consider the injured party’s share in responsibility and reduce the damages accordingly, using a specific dollar amount.

Contributory negligence and comparative negligence are both complicated, no matter what state you live in. Those involved in a personal injury car accident lawsuit should seek legal help, to make sure they recover what they are entitled to. Or don’t pay more than they’re responsible for. 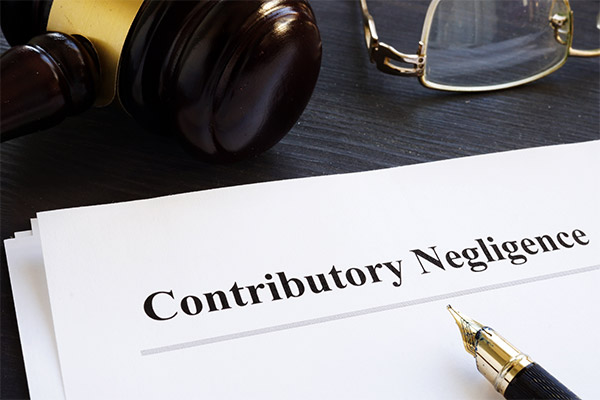