How to Determine Fault in a Car Accident

Police reports are important in determining who’s at fault in an accident, but you might be surprised to know who makes the final call on that.

Trying to determine fault in a car accident is Job No. 1 for every party involved – police as well as insurance companies and accident attorneys.

Not only is fault sometimes purposely disputed for insurance-related reasons and legal liability, the chaos following a car accident can cloud even the most innocent attempts to accurately remember the series of events resulting in a collision.

So much happens so quickly that the best approach for drivers involved in a car accident is to document as much as possible at the post-accident scene while saying as little as possible.

This doesn’t mean you take the Fifth when exchanging insurance information with other drivers or speaking with police. Just avoid admitting fault to anyone, even if you believe your mistake may have caused the accident.

Sorting out fault after a car accident can be a complicated process that may or may not be a reason to involve an attorney. It depends on the circumstances.

The sure thing, however, in most any car accident is that fault – often percentage of fault – will go a long way in determining what insurance companies cover and what happens to your insurance policy rates. For instance, car insurance rates can increase by nearly 30% after an accident with a bodily injury claim.

Who Determines Fault in a Car Accident?

The surprising answer is that insurance company adjusters determine fault in a car accident.

Most drivers assume the police determine who’s at fault. Police on the scene will make every effort to investigate the cause of the accident and their report might well include their determination concerning fault, but that is not the final say.

It’s the job of insurance company adjusters to review the police accident report, consider all available evidence, then decide who’s at fault.

If you disagree with the adjuster’s decision, it may be in your best interest to call an attorney.

How to Determine Fault in a Car Accident

Insurance company adjusters rely on many sources of information and evidence in making their determination for who’s at fault and sometimes, the involved parties share the blame.

There are some accidents where determination may be obvious, say in the case of a driver texting while driving and running into the back of a driver stopped at a red light.

But in accidents that are not so clear cut – or, in fact, if it’s pretty clear both drivers shared fault – insurance company adjusters assign percentages of fault to each party. That percentage of fault can be critical to your ability to pursue compensation.

This is why it’s so important to gather as much evidence from the scene at the time of the accident. Some, not all, of the sources of information for insurance company adjusters offer the opportunity to make your case.

This is one of the most powerful tools in building a case to prove the accident wasn’t your fault. The more details you can provide at the scene of the accident – whether it’s pictures of bodily injuries like bruises, scrapes, etc. or skid marks on the road – can help investigators determine fault.

In the case of property damage or bodily injury, the police will arrive and investigate. They will note the position of the cars, the damage done to each vehicle; the location of that damage; and they will ask questions of each driver involved. Don’t lie to the police, just give an objective recount of the accident without admitting fault.

An uninvolved driver or pedestrian might give their account of the accident and shed light on each driver’s culpability.

In most cases, drivers who are cited for moving violations are considered more at fault when insurance company adjusters review a claim.

Insurance company adjusters may ask questions of each driver to put together a supporting narrative to go along with the on-scene police findings and supplemental evidence.

Emotions run high after car accidents. Sometimes, drivers blame each other. But one driver may acknowledge not seeing a stop sign, for instance, or admit to distracted driving.

What you say in conversation with the other driver(s) involved in the accident, can be one factor in how fault is determined.

If you’re going to talk about the accident, it might be wise to do that with an attorney.

Car accident damage cannot always tell the entire story in an accident investigation, but it can provide critical information in the determination of fault.

Culpability in certain accident scenarios – t-bone, rear-end collision, side swipe, multi-car accidents, collisions at intersections or in parking lots – may vary depending on state law.

New York, for instance, typically applies a safe-stopping distance rule when determining fault in rear-end collisions. As always, it’s important to consider all factors involved in each scenario.

Your car was struck on the side by a car with accident damage to its front bumper and/or hood. Police can determine how the collision happened but not necessarily why; such as which driver had the right of way.

If one driver fails to stop in time and hits another car from behind, with both vehicles traveling in the same straight line, the trailing driver typically shares all of the blame or at least a high percentage of fault. But the driver struck from behind can be found partially culpable if it’s determined his or her recklessness contributed to the accident.

These are often the result of drivers changing lanes, whether on a two-lane road or an interstate. Other factors could help determine fault, such as whether a manufacturer’s lane departure warning signal was operational at the time of the accident.

Suffice to say that the challenge of determining fault in a two-car accident is exacerbated in a multi-car collision, making photographic evidence at the scene and eyewitness testimony even more important to an investigation. If you can, take a picture and find a witness.

This is where the highest percentage of car accidents happen. It’s hardly surprising given the factors involved: changing lights, pedestrian crossings, the relatively sudden appearance of motorcycles.

Fault in intersection accidents is often determined by driver negligence. Which driver ran a light or failed to yield the right of way likely will be the one who leaves the scene with a traffic citation.

In a Parking Lot

Determination of fault isn’t often clear-cut. It can depend on whether the accident involves two cars backing out of parking spots simultaneously, rear end collisions or two drivers racing each other to the only vacant parking spot within easy walking distance of a place of business.

What Happens if Fault Cannot Be Determined

One scenario:  a driver swerves to avoid another driver changing lanes, loses control and crashes. The other driver’s car doesn’t have so much as a scratch but likely caused the accident.

It’s not clear cut who’s to blame. But even then, insurance companies will go to great lengths to determine fault, including traffic camera video and eyewitness testimony. So, accidents where the fault goes undetermined are the exception.

In those cases, after exhausting their fact-finding in a process that could take weeks or even months, insurance companies may agree to a 50/50 insurance settlement.

What Is a No-Fault State

Each driver files a claim with his or her own insurance company in no-fault states. In most no-fault states, drivers are required to carry personal injury protection (PIP) as part of their insurance coverage. No-fault insurance pays for medical expenses using PIP.

No-fault states restrict the right to sue unless conditions are deemed to meet a certain “threshold.”  No-fault states are not the rule in the United States. Only 12 are classified as no-fault: Florida, Hawaii, Kansas, Kentucky, Massachusetts, Michigan, Minnesota, New Jersey, New York, North Dakota, Pennsylvania, Utah. 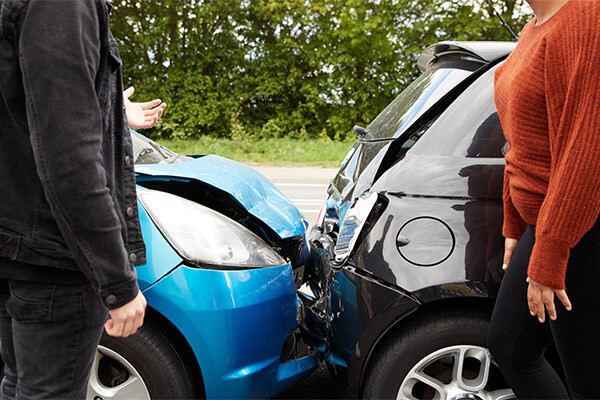