Car accidents often create legal problems. There are steps you can take to improve the chances you won’t be found at fault for an accident.

Knowing how to prove you are not at fault in a car accident is the key to not having to foot costly bills as well as the resulting increase in insurance premiums.

Every state has different rules regarding car insurance, in most of them, the driver of the at-fault car pays (specifically, the person the insurance company of the person the car is registered to). Sometimes it’s clear who is at fault in a car accident, but often fault is more difficult to prove.

Being found at fault means your insurance will pay for damages, injury, loss of income and more for the other driver and their passengers. The result is likely an increase in your insurance premium, and if it happens more than once, your auto insurance could become unaffordable.

In the 12 no-fault states in the U.S., each driver’s insurance pays their own damage and injuries; both drivers are required to file a claim. Claim rules are strict in these states, including the type of insurance a car owner is required to have.

What you do after a car accident can help to prove you are not at fault.

What You Need to Prove

There are three keys to proving you are not at fault in a car accident involving another vehicle:

10 Ways to Prove You Are Not at Fault

Proving you’re not at fault in a car accident means taking immediate action, while at the scene of the accident. Even if you think there is no question the other driver is at fault, insurance companies want as much backup as you can give them.

To prove you were not at fault, take these precautionary steps:

A police report detailing the accident can be key to convincing the insurance company the other driver was at fault. Calling 911 ensures the police will come to the scene. Don’t let the other driver talk you out of calling.

Get a police report.

As soon as you finish calling 911 to report the accident, offer to exchange contact and insurance information with the other driver. This is a must. You need their information to file a claim. Don’t let the other driver put you off. If they are injured or difficult to deal with, enlist the help of the police officer at the scene.

Don’t admit to any fault, even in casual conversation. It’s human nature to apologize, even if you don’t have anything to apologize for, especially if someone is hurt or upset. But if the accident is not your fault, say as little as possible to the other driver and others at the scene, no matter the situation.

An off-the-cuff remark may be used to “prove” the accident was your fault. This includes what you say to the police, since it will likely go into the report. Stick to the facts and don’t muse about things like what you could’ve done better or how bad you feel.

Memories and impressions can be faulty, especially with the shock that comes after an accident, but the camera doesn’t lie. Use your cellphone camera to document the damage to your car.

If you were rear-ended, be sure to get both the rear end of your car and the front-end damage of the car that hit you.

If you are hurt or too shaken up to take photos, ask someone else, even a sympathetic bystander, to do it for you. Make sure they use your camera, so you can be sure you have the photos when you need them.

Photos of the area around the accident scene can also be crucial to proving you weren’t at fault. For instance, if the other driver ran a stop sign, a photo showing the sign is clearly visible will help.

You may not know right after an accident what will be important, so take general scene photos. The weather, parked cars, the angle of an intersection – anything at the scene may become vital support for your case.

Get contact information from any neutral witnesses to the accident. If what they saw will help prove you weren’t at fault, ask them to make a statement that will become part of the police report.

7. Get the Police Report

Your insurance company will want a copy of the police report. So will you. It’s your legal right to have it, so don’t be shy about asking for it.

The police report will have information you may not have had access to at the scene – including the other driver’s statement, the officer’s perception of what happened, whether the other driver broke any laws, an accident scene description, witness statements and more.

Police reports can sometimes contain errors. If there is a factual error, you can ask the reporting officer to attach an addendum correcting it. If the officer’s perception of what happened differs from yours, you can ask to add to your statement. It’s up to the police department to approve this.

You can also provide your version of what happened to your insurance company. Be sure to be factual. Get to the point and don’t let personal feelings come into play while telling your side of the story. If you can see a problem developing, you may want to hire an attorney to help.

Familiarize yourself with your state’s traffic laws before you’re even in an accident, and if it’s too late for that, research whether any laws apply to your accident. You’ll be armed with knowledge that can help you prove you are not at fault. Your state department of motor vehicles will have this information online.

Some accidents are caused by behavior so obviously negligent that fault is usually not in question – running a red light, speeding, drinking and driving are some instances.

If you can prove the other driver is guilty of a no-doubt liability, that will easily prove you were not at fault. It’s not always a sure thing though – insurance companies and attorneys are skilled at finding loopholes that can sometimes turn their client’s fault around and point it at you.

Don’t take for granted that a no-doubt liability automatically means you won’t be found at fault.

Hiring an attorney can be the best tool you have to prove you are not at fault. An attorney who is trained to understand the ins and outs of fault in an accident can advocate for you.

Attorneys are experienced at dealing with insurance companies, they know the ins and outs of traffic laws, have access to expert witnesses, can gather evidence and information you may not be aware of or have access to. If you are in a serious accident, particularly if you are injured, contact an attorney immediately.

Most attorneys will take your case on a contingency basis – it costs you nothing until you win. 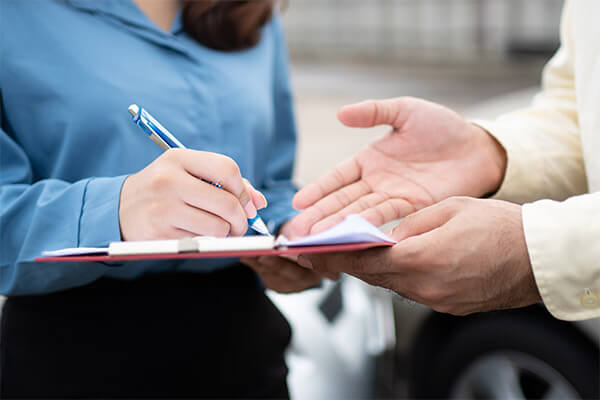