Do You Get a Ticket for an At-Fault Accident?

Insurance adjusters, not law enforcement, decide who will be compensated in a car insurance claim. Even though you get a ticket for causing a car accident, you may still be in line to collect damages.

Human behavior is the critical factor in more than 90% of motor vehicle accidents, so it stands to reason that when there’s an accident, it’s likely a person is at fault. Possibly you.

If you get a ticket for causing an accident, it can have a negative effect on your insurance claim. But it’s also important to understand that the way the law and insurance companies view accidents are different. They are seeking different outcomes and work separately to achieve them.

In that sense, getting a ticket doesn’t necessarily mean you’ll be found at fault for an accident.

Law enforcement and insurance do overlap, however, when it comes to accidents. If you are in an accident and get a ticket for something that was a cause or contributed to the accident, you will likely be found at fault, or share some of the fault, where an insurance claim is concerned.

“Most at-fault accidents will result in a ticket,” said Ben Michael, attorney, of Michael & Associates in Austin, Texas.

“That’s because fault is determined by negligence that caused an accident. If you were driving negligently, you were likely doing something that violated traffic law.”

The nature of the violation that led to the ticket, seriousness of the accident and whether the other driver or drivers share fault, will all play a part in determining your insurance claim.

Will You Get Ticketed If the Accident Was Your Fault?

A car accident is not in itself a traffic violation. However, what caused the accident may be.

Police at the scene of an accident aren’t thinking about your insurance claim. If you violated a traffic law and therefore caused the accident, you will get a ticket. You may even get a ticket if you were violating the law and it didn’t cause the accident.

On the other hand, if police can’t determine that someone was violating the law, they may not ticket anyone.

Unfortunately, your insurance company may still find you at fault.

For instance, let’s say you were texting and your car crossed into oncoming traffic, causing an accident. Both cars veered off the road, rather than collided. While the other driver says he saw you texting and you crossed the center line, what happened may not be clear to police, from looking at the scene.

If the injuries aren’t fatal, the police my determine they can’t attribute fault. In that case, they may not ticket anyone.

The insurance company will still investigate. Since they have to determine fault for a claim, they will look at all the factors, in some cases more in-depth than police did. If you were violating the law and got a ticket, that will be a factor with the claims adjuster.

But a ticket itself doesn’t mean that the adjuster will definitely determine you are at fault. You can get a ticket after an accident for a violation that had nothing to do with the cause. Let’s say you are driving with an expired registration and someone runs a red light and hits you. You may get a ticket for the expired registration, but it didn’t cause the accident or factor into it in any way. Police at the scene just happened to notice it and ticketed you for it.

In instances where a traffic violation clearly caused an accident, you will get a ticket as well as be found at fault.

When a Car Accident is a Traffic Violation

Some of the most common car accident causes that result in tickets:

Will a Ticket Affect Your Car Insurance Claim?

Insurance adjusters, not the police, decide who is at fault in car insurance claim. If you get a ticket as a result of causing an accident, it will count against you with the insurance company.

There are three factors that determine fault:

Most moving violations – those that involve driving – mean the driver was negligent. If that negligence caused the accident, then the adjuster will find the driver at fault, in full or partially.

Tickets for non-moving violations – for instance the expired registration we discussed earlier – won’t have an impact on a claim.

Fault can also be shared among drivers. “There are many circumstances in which both drivers are considered to be partially at fault, so they both receive tickets,” Michael said.

For instance, let’s say you were texting and crossed into the oncoming lane. The driver in that lane was speeding, so he didn’t have time to react. He overcorrected and contributed to the accident. If the police can determine this is what happened, you would both likely get tickets.

Most states have some form of comparative negligence, which means drivers can share the fault for an accident and the insurance companies attribute claim amount depending on the amount of fault.

If you get a ticket in an accident, you’re still covered by insurance that protects you.

If you have collision insurance, it will cover the damage to your car.

Drivers in no-fault states and others who have personal injury protection (PIP) insurance will still be compensated for their lost wages and injuries up to the maximum of their PIP, even if they’re at fault and got a ticket.

How Long After an Accident Can a Citation Be Issued?

Police may not give you a ticket at the scene, but instead wait until after the accident is further investigated before issuing one. This is particularly true for multi-vehicle accidents, or ones where they have trouble determining fault.

The length of time they have to issue a citation differs by state, but is generally 30 or 60 days, though in some states it’s much longer. If you are concerned you’ll get a ticket, look up your state’s law online to see how long it could take.

The insurance company will not wait for a ticket to investigate who is at fault, or even to make a determination.

How Much Is a Ticket for Causing an Accident?

Traffic law, and the fines associated with it, vary by state. How much a ticket for causing an accident will cost you depends on the violation you’re ticketed for.

For instance, penalties for speeding, the most common cause of accidents, vary from $50 in Tennessee to $2,000 in Oregon. Many states calculate the penalty by how many miles an hour over the speed limit the driver was going, and fines can be in the hundreds of dollars.

If you’re driving while intoxicated it’ll cost you hundreds of dollars, if not more than $1,000, no matter what state you’re in, as well as temporary loss of license and possibly jail time.

If you cause an accident while speeding or driving while intoxicated, the fines are increased.

Even fines for “minor” things that cause accidents, like failure to yield, are generally $200 or more, with added costs if people are injured or property is damaged.

“A ticket can definitely cause your insurance premiums to jump up,” Michael said.

One way to help keep that down is to prove you’re looking to be a safer driver in the future, particularly if it’s your first ticket.

“Many states offer a course for people to take when they get their first ticket that allows them to wipe their traffic violation off of their record for good and doing this will ensure that your insurance remains the same,” Michael said. “If taking this course is an option for you, do it.”

How to Fight a Ticket for Causing a Car Accident

If you are determined to fight a ticket for causing a car accident, be sure you have evidence to back up your fight.

Advocating for yourself should start at the accident scene – you are required to give the police your name, address, registration and insurance information. If there’s any chance you could be found at fault, that’s all you should give. Don’t chat about what you think happened. You are not required to give a statement.

Request the police report and any other documentation gathered at the scene after the accident, so you’ll have the information you need to dispute the ticket.

You can go to court yourself, but if fighting the ticket is crucial to your insurance claim, you should consider hiring an accident attorney. Attorneys with experience in fighting tickets and helping people get insurance claims know how to investigate accident information, call in expert witnesses and more that will support your case.

An attorney can not only fight the ticket, but also look deeper into whether you are at fault and see if you can recover damages through an insurance claim. 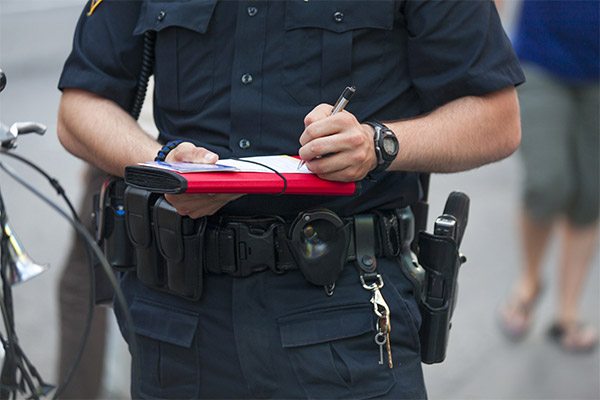 Home » Car Accident » FAQs » Do You Get a Ticket for an At-Fault Accident?