What Happens If Both Drivers Are at Fault in an Accident?

In car accidents in which both drivers share fault, the state the accident happens in can make a big different in the amount of damages an injured party can recover.

A car accident in which both parties share some of the fault is known as a “shared liability” accident.

Every state has rules that consider how much the less-at-fault driver’s liability figures into how damages can be collected and how much they can be. Shared liability rules range from no ability to collect damages in four contributory negligence states to a variety of solutions in the remaining comparative negligence states.

In all cases, the rules can be confusing, and the amount of shared liability can be the difference between covering medical bills and other damages, or not. It’s always a good idea to consult with a personal injury attorney if you are in an accident with shared liability, no matter how much of the liability is yours.

What Is Shared Liability?

There are car accidents in which both drivers share some of the fault and liability when it comes to being responsible for damages caused by the accident. Each of the 50 states and Washington, D.C., deals with shared liability in different ways. In most states fault is portioned to determine how much fault each driver carries. In four states, both are considered equally at fault, even if one is a little bit at fault and the other one is a lot at fault.

In all cases, the shared liability has an impact on damages that an injured party can collect and often must be sorted out in court.

“There are personal injury cases requiring attorneys to recognize their client contributed to the accident, but suit is filed since the parties’ respective fault is not clear-cut,” Andrew Bronsnick, a partner at Mandelbaum Barrett, in New Jersey said. “The specific facts often require the testimony of the parties by way of deposition or trial to properly determine liability.”

The categories of shared liability are:

For the sake of simplicity, we’ll use the word “driver” when discussing the different categories, but one party may also be a pedestrian, a bicyclist, or any other person involved in an accident that also involves a motorized vehicle that is covered by car or other vehicle insurance. Even if not driving, a pedestrian or bicyclist can be the party that carries most of the fault.

“Comparative negligence is the determination that more than one party is negligent, which requires that each party’s percentage of fault must be made by the jury by comparing both,” Bronsnick said. “The jury attributes the percentage of negligence for each party with the total amount of 100%.”

There are 12 states with pure comparative negligence laws:

A modified comparative negligence law allows drivers to collect damages if shared liability is equal or less. Some states draw the line at 50%, some at 51%.

In the 23 states with the 51% cap, a driver can’t collect if they’re 51% or more responsible – in other words, to collect, an injured party must have 49% or less liability.

Some states determine the amount of damages in line with the percentage of the other driver’s fault. If you’re 49% at fault, you can collect 51% damages from the other driver.

Some states with modified comparative negligence, though, consider damages separately from the percentage of negligence. For instance, in Maine, a 50% state, a jury can reduce damages paid to the injured party using a specific dollar amount, not a percentage, based on the jury’s determination of how liable the injured party is.

States with a 50% threshold are:

States with a 51% threshold include:

Let’s look at the example of the driver who ran the stop sign. He not only ran the stop sign, he was speeding and driving while intoxicated. That’s a lot of liability. But the other driver was looking at his cellphone – even though he had the right of way and with all the liability related to the other driver, the jury determines he could’ve been more aware of his surroundings and was violating the law by looking at his cellphone. Since he shares the liability, even though it’s a tiny fraction of the other driver’s, he can’t collect any damages, no matter how bad his injuries and damage to his car.

Generations ago, contributory negligence was the standard, but most states came to realize how unforgiving it was to plaintiffs and modified their laws to allow comparative negligence in some form.

Contributory negligence is the rule of law in:

South Dakota has a unique shared liability rule. Slight/gross negligence doesn’t assign a specific percentage but determines that one driver must be “grossly” negligent and the other “slightly” or less for the plaintiff to recover damages. The definitions of gross and slight are vague, meaning that determinations can be arbitrary. 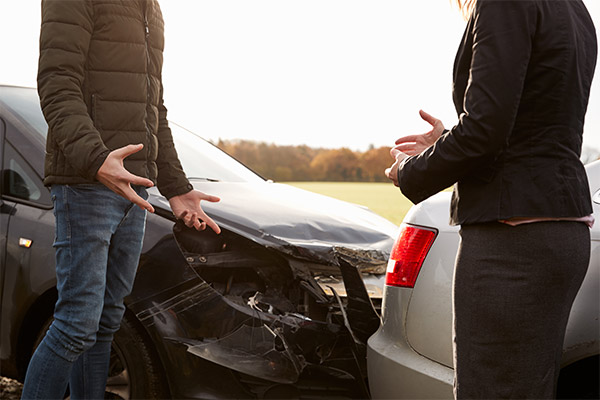 Home » Car Accident » FAQs » What Happens If Both Drivers Are at Fault in an Accident?