What Happens If You Get into a Car Accident Without Insurance?

Taking to the road is risky business in the best of circumstances. But getting behind the wheel without insurance having your back is a blind roll of the dice. Uninsured motorists who suffer collisions face big problems, even if the crash wasn’t their fault.

Across most of America, personal vehicles dominate the process of how we get from here to there. Consider getting to work: According to Statista’s Global Consumer Survey, 76% of us commute in our own cars. With nearly 159 million Americans working in the summer of 2022 (and diminishingly few of us in carpools), that’s a lot of vehicles on the road.

And that doesn’t even account for our neighbors dashing about running errands, heading to the gym or golf course, going to school, or doing any of the countless other pursuits that put us behind the wheel.

If that doesn’t give you pause, this should: In its most recent survey (2019), the Insurance Research Counsel estimated one in eight motorists — 12.6% — are on the road without insurance. That’s a lot of rolling-of-the-dice.

“If you do not have insurance and you cause a crash, you are financially responsible to the other person for their claim,” Fairfax, Va.-based personal injury lawyer Brian Glass said. “Most of the time, their uninsured motorist carrier is going to pay the claim and then sue you for what they paid. …

“There may also be criminal repercussions or license suspensions, depending on the state.”

Driving, always risky business, has grown even more so: An estimated 42,915 people died in traffic collisions in 2021, a 10.5% surge from 2020, and the highest since 2005, according to the National Highway Traffic Safety Administration.

Fold in the one-in-eight driving without insurance, and that becomes a recipe for disaster, wrapped in catastrophe, stuffed inside heartache.

What happens when someone without insurance is in a traffic accident? It’s complicated.

“This seems like such a simple question but there are several possible answers,” says Juan Dominguez, a personal injury lawyer based in Los Angeles. “It depends on the circumstances of the accident. Were one or both drivers uninsured at the time of the accident? Which state did the accident occur in? Who was at fault? It’s a bit easier to break down each answer by taking these factors into account.”

Scenario One: You’re uninsured and in an accident, but you’re not at fault. What happens?

In some states, you can make a claim against the at-fault driver. (No, contrary to popular myth, you are not automatically legally at fault if you’re uninsured and in a crash.) In states with “pay-to-play” laws, you could be out of luck.

“Being uninsured does not prevent you from bringing a bodily injury or a property damage claim in the vast majority of states,” Glass says. “In most cases, nothing changes, and you'll be able to bring your claim for property damage and for bodily injury just as if you had insurance coverage.”

Understand this, however: Uninsured motorists face upfront expenses for personal medical costs and vehicle repairs. And because they’ll have to work directly with the at-fault driver’s insurance company (unless they retain legal counsel), getting reimbursed may be complicated.

No matter where you are, who is to blame, or the status of your insurance, if you’re in a crash, stay put until the appropriate actions have been taken. Drivers who leave the scene in a hit-and-run accident may face criminal penalties, especially if anyone is hurt.

Scenario Two: You’re uninsured and at fault for the car accident. What then?

“If you were uninsured and at fault for the accident, you would be responsible for paying your own medical and car repair bills. If your car were totaled, you’d have to pay to replace it out of your own pocket.

“Depending on the state, you could also be sued by the other driver and any passengers traveling with them for their medical bills and damage to their vehicle.”

Uninsured drivers who are determined to be legally to blame for a collision face a variety of sobering consequences:

If Your State Does Not Require Insurance

Scenario Three: You’re in a crash in New Hampshire or Virginia, the states that do not require car insurance. What happens?

If the collision is your fault, the rules of Scenario Two generally apply. Yes, you are allowed to drive without insurance in New Hampshire and Virginia, but in both states you are financially responsible for damages and/or injuries you cause.

“If you get into an accident with an uninsured driver in one of those states,” Dominguez says, “make sure you go through the same procedures as if you were in any other state since uninsured drivers in both states will still be financially responsible for any damages, if they were at-fault for the accident.”

Accident Without Insurance in a No-Fault State

Scenario Four: The accident occurred in a state with no-fault laws. What happens then?

“Things work a bit differently in no-fault insurance states” such as New York, Florida, Massachusetts and Pennsylvania, Dominguez says. “Drivers file claims through their own insurance, regardless of who was to blame for the crash.

“If you didn’t have insurance, you’ll have to pay your medical bills and the cost to repair or replace your vehicle yourself. However, unlike drivers in at-fault states, the other drivers can’t sue you for their injuries unless they are over a certain amount, depending on the state limit.”

What if neither driver has insurance?

If neither driver has insurance, each will be on the hook for their expenses, at least initially. Recovery for those costs may be possible through a lawsuit, notes Glass: “The driver who caused the crash would be responsible for paying for the replacement vehicle, rental car, and injuries to the other driver.”

However, Glass continues, “As a practical matter, most people who don't have insurance also do not have the ability to pay a judgment if you win your court case. So, if you are uninsured and involved in a crash with another uninsured driver, you will probably have a very hard time recovering your damages.”

Harsh practicalities aside, Dominguez says, “If neither driver has insurance, determining who was at fault for the accident is crucial. The at-fault driver will not only be responsible for their own medical expenses, they’ll also need to cover the other driver’s damages including all medical bills. … If the accident happened in an at-fault state, both drivers will have trouble obtaining compensation for their accident-related expenses.”

What happens if you get in a car accident without insurance on a suspended license?

One of the chief reasons motorists lack car insurance is because their license has been suspended. The suspension triggers the policy cancelation.

“The civil outcome would not be likely to change very much,” Glass says.

If the crash is not your fault, aside from being cited for driving with a suspended license, the procedure is much the same as in Scenario One. Chances are you’ll have to bring a personal injury claim to recoup any losses … unless you’re in a no-fault state. Then Scenario Four applies.

What happens if you get in a hit-and-run with no insurance?

“If you were the victim,” Dominguez says, “it depends on whether the perpetrator has been found. If not, unfair as it may sound, you have no recourse since you can’t sue them or [because you’re uninsured] go through your own insurance.

“If the police identify them, you can sue for damages. If they also didn’t have insurance, you’ll probably have trouble obtaining any compensation. After all, if they couldn’t afford auto insurance, who’s to say they have any tangible assets?” 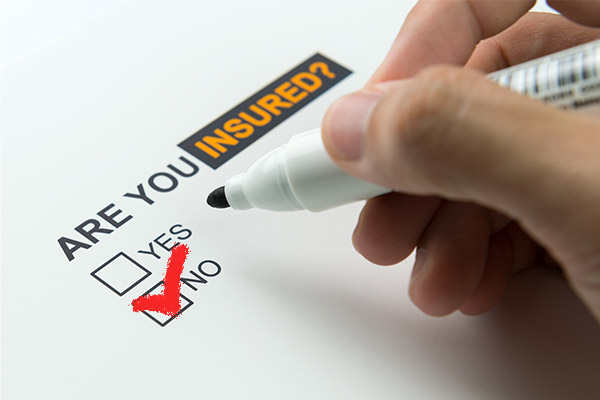