Who Is Responsible If You Hit an Illegally Parked Car?

Determining fault in a car accident where there is only one driver might seem profoundly easy, even for a rookie inspector.

But the truth is there are one-driver accidents when circumstances do muddle the concept of who’s at fault.

What if the car you struck was parked illegally? You may not be off the hook since you were still the only one behind the wheel, and state laws require drivers to exercise reasonable care.

But if that parking violation significantly compromised your ability to avoid a collision, you could at least have a case to prove shared negligence. And if you suffer injuries as a passenger in a car that hits an illegally parked car, your case almost certainly will carry more weight with insurance companies and juries.

Who Is at Fault If You Hit an Illegally Parked Car?

“Anytime there’s a violation of a statute such as a parking ban, it can be regarded as negligence per se,” said Tom Merriman, managing partner of Merriman Legal in Cleveland, Ohio. “It’s the causality that’s most often the determining factor.”

Consider two scenarios to understand the difference in causality that could crop up in deciding fault in an accident involving an illegally parked car.

Scenario 1: You hit a car illegally parked in front of a fire hydrant. The reason for parking bans around fire hydrants is to allow rescue personnel access to that area. The ban does not exist because parking there presents a safety hazard for other drivers.

“In that case, the negligence of the illegally parked car’s owner isn’t a direct cause of the accident you’re involved in,” said Merriman.

Scenario II: You hit a parked car that is illegally parked around a blind turn. The reason why a parking ban exists at that location is expressly because parking there is a safety hazard for other drivers.

“There is some level of causation of accident in that scenario,” Merriman said. “If I’m the driver there is still the question of comparative fault. I’m going to have to prove that the owner is more at fault than I am for the accident given that I have a duty as a driver to maintain a lookout and exercise reasonable care.”

“That claim instantly has more value,” said Merriman, whose firm is litigating one such case presently.

What Happens after You Hit a Car That Is Illegally Parked?

What should happen is basically the same as what happens in the aftermath of a traffic accident involving another driver.

Depending on the nature of the parking ban violation, you may be able to prove shared negligence.

Even if the whodunit aspect of the accident involving a single driver and a parked car isn’t a mystery, the accident’s circumstances can affect the outcome of insurance claims and – if necessary – jury decisions. 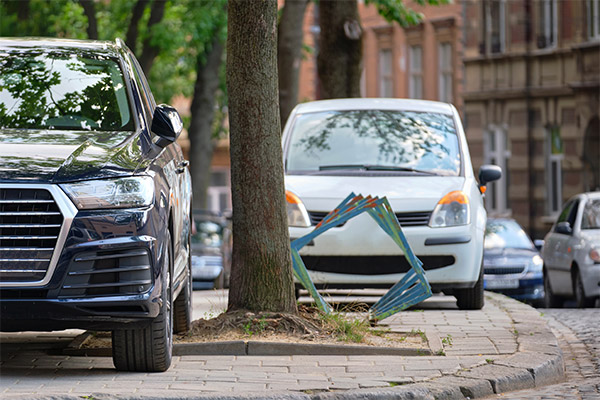 Home » Car Accident » Fault » Who Is Responsible If You Hit an Illegally Parked Car?