What Happens If You Get in a Car Accident with a Police Officer?

An accident with a police vehicle, no matter who was at fault, means dealing with government insurance and that can be complicated. Seriously consider using an attorney.

Car accidents were the third-leading cause of police officer deaths in the years 2011-2020. Add in police being fatally struck by cars and police motorcycle crashes, and it rises to second-leading cause, right after being shot. And then add the accidents that aren’t fatal, and you discover a lot of police cars getting into a lot of crashes, causing a lot of problems.

The nature of the job requires police to often drive in ways that can be hazardous and would violate the law if a civilian was doing it. Police are expected to multi-task while in their vehicle, including using computers, radios and more.

If a police officer is responding to an emergency, they are allowed, in most cases, to drive that way, and other cars are expected to yield the right of way for them.

On the other hand, police who are driving while distracted, or driving recklessly, may be found at fault for an accident. This can even mean when they are responding to an emergency.

But being compensated if you’re in a car accident with a police officer, even if the police car hit you and is at fault, can be difficult. Some states have laws that give police immunity from being sued. Officers on duty, and their vehicles, are not covered by the same type of insurance that other drivers are. They are insured by the government. That means seeking damages can also be a complicated and lengthy process.

How Is Fault Determined in an Accident with a Police Car?

If a driver acts negligently, and that leads to a car accident, that driver is generally found to be at fault. But “negligent driving” – for instance, running a red light or stop sign, speeding, driving in the wrong direction – may be necessary for a police officer responding to an emergency. Police usually signal to other drivers that they are responding to an emergency by using their sirens and lights.

Drivers, when they see this, are supposed to pull over or get out of the way however possible. Still, accidents happen.

If you are in an accident with a police car, behave as you would in any other accident. Pull your car out of traffic, if possible. Call 911 and report the accident.

The officer, if able, likely will radio in the accident, but calling 911 ensures it’s reported as soon as possible. Check on the other driver. The officer likely will check on you, too. Remain as calm as you can. Take photos of the accident scene and the damage with your phone.

Police cannot investigate accidents they are involved in, so the responding police will begin the investigation. Be sure to get copies of the accident report and any other related police documents.

As with any accident, police who arrive at the scene of an accident may have an opinion of who is at fault, and may put it in the report. Fault, though, is determined by the courts and insurance companies, not the opinion of the officer at the scene.

Determination of fault in an accident involving a police car will proceed the way it does after any other accident – with the exception that the insurance covering the police officer isn’t regular auto insurance, but the overall liability insurance the covers the agency the officer works for. This means that the process will be more complicated and take longer.

Notify your insurance agency as soon as possible after the accident, so that they can deal with the government agencies.

Exemptions for a Police Officer

Police don’t have to obey traffic laws if they are responding to an emergency, and in such cases are generally exempt from liability.

But there may be exceptions, depending on what state the accident is in. Police are expected to drive as safely as possible, even if they are speeding and running red lights to respond to an emergency. If you are in an accident with a police officer responding to an emergency, check state law. You may be able to make a case that the officer was not exempt.

What Happens If a Cop Hits Your Car?

Accidents involving police vehicles happen frequently, and for a variety of reasons. Studies, including one by the National Institutes for Occupational Safety and Health, found that many police-involved crashes are preventable. They are caused by police “multi-tasking” while driving, being tired, speeding for no reason and more.

The NIOSH study found that many police officers are poorly trained when it comes to operating at high speeds and in dangerous situations.

But even if it’s obvious that it’s the fault of the police officer who hit you, getting compensation for your injuries and damages can still be tricky. Police vehicles and the officers who drive them aren’t individually insured the way civilian cars are, so the insurance that covers the department, municipality or state that oversees the police officer, is responsible for damages. This means dealing with government agencies, local laws and red tape. It can be a long, complicated process.

States also have deadlines on how long you have to file a claim against a government agency after an accident involving a police car or other government vehicle. Depending on the state, this can be as little as a couple of months. Be sure to find out as soon as possible what the state law is regarding filing a claim against the municipality the police officer works for.

If you are in an accident with an off-duty police officer, the officer’s own insurance should cover it and it should proceed as any other accident claim would.

Hiring an attorney who is experienced in car accident cases and dealing with police agencies will help ensure that you are protected, even if an accident with a police car is minor.

Immunity for Police in a Crash

An investigation by an Ohio television news team found that the city of Columbus invoked qualified immunity in 60% of property damage car accidents involving police over a two-year period. Ohio law allows qualified immunity for police officers responding to an emergency, and defines “emergency” as any call that police respond to.

On the other hand, Florida releases a police officer and other government employees from immunity in an accident if they were being negligent and the injury can be compensated.

Every state handles qualified immunity differently, and it’s just one example of the complications that can arise when police are involved in an accident.

What Happens If You Crash into a Police Officer?

If you crash into a police car and it’s an accident with no negligence on your part, it should proceed the way most accident claims do. Your insurance company will be responsible for damages to the police car and the officer’s injuries if you are in an at-fault state.

But, depending on how you were driving, there may also be more serious consequences.

Every state has laws requiring motorists to pull over to allow emergency vehicles to pass, as well as laws requiring drivers on a multi-lane highway to move to the far lane if a police or other emergency vehicle is on the shoulder with lights flashing. If you don’t yield or pull over, and it results in a collision with a police vehicle, you will not only be held liable for damages, but also likely cited for the violation.

If you are speeding, run a red light, driving while intoxicated, deliberately crash into a police car, are fleeing the scene of a crime or are breaking the law in some other way, you can face serious charges, as well as being held responsible for damages.

If you live in one of 12 no-fault states and get into a crash with a police car, the process is similar to most other accidents in that you make a claim for your own injuries and damages through your insurance.

But just as with other accidents in a no-fault state, in some circumstances you can sue for additional damages. In the case of an accident with a police officer who caused the accident, you would sue the government agency that oversees the officer.

No matter how accidental the crash may be, dealing with police and government agencies can be intimidating. Even if your insurance company is handling it, the support of an attorney who is skilled in dealing with car accidents, particularly those involving police or government vehicles, could save you a lot of time, hassle and money. 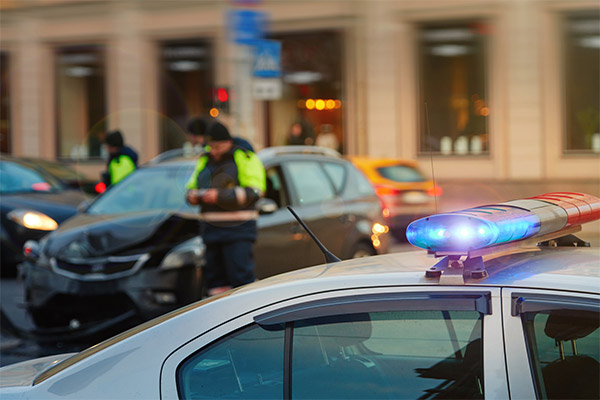