Who Is at Fault in a Self-Driving Car Accident?

Human error accounts for the vast majority of accidents involving self-driving cars. But manufacturers may increasingly face liability issues in a future of autonomous driving.

Drivers involved in car accidents are best advised not to admit fault when they exchange insurance and contact information.

If possible, they should show they weren’t to blame by providing eyewitness accounts, photographic evidence and other supporting arguments.

But self-driving technology – a trend growing more prevalent by the year and expected to rapidly become the norm on our nation’s highways – increasingly brings a third party into the negligence discussion: your car itself.

Industry experts believe the advances that have brought driver assistance systems of varying sophistication to the driving experience will one day evolve into highways full of driverless cars.

In the meantime, you can expect the debate about manufacturer’s error versus driver negligence to only grow as insurance adjusters and car companies try to protect their respective interests while sorting out liability claims in accidents involving self-driving cars.

Lane departure warnings, blind spot detection and the like are clear safety advances in car technology. But they haven’t reduced the liability for drivers operating those systems.

“Cars have thankfully become much safer,” said Evan Walker, a San Diego-based attorney and owner of The Law Office of Evan W. Walker. “But if a person feels safer driving a car, then that person may be apt to drive less safely. And a self-driving car is no panacea. A person must still take action when using a self-driving car. Those actions leave room for error.”

So it’s worth examining whether new technology is the solution to making our roads safer or if our dependence on technology is giving drivers a false sense of security that might make matters worse.

Certainly, if cell phones and GPS screens are included in the definition of new technology, we can point to distracted driving as making our roads less safe.

In comparative negligence (“fault”) states where neither car meets the definition of self-driving each driver in an accident can be held partially liable.

Beyond that, you probably guessed there wasn’t going to be an easy answer to the question of fault in accidents involving self-driving technology.

Some states, such as California, hold the driver responsible in certain kinds of accidents even if the car was on self-operating mode. Generally speaking, the law frames it as the driver giving the car consent to operate in that mode.

Other states have laws designed to hold manufacturer’s responsible, in effect making the autopilot responsible in certain accidents.

“We may see some defenses raised that – for instance – the driver is not at fault because the “self-driving” car should have seen and avoided the crash,” said Brian Glass, a trial lawyer for Ben Glass Law in Fairfax, Virginia. “But I believe that in most cases, these defenses will fail because of the manufacturers warnings that come with the car that ultimately hold the driver responsible for any crashes.”

If this sounds vaguely similar to determining how a plane crash happened, well, there is a “black box” aspect to discovering whether a particular auto pilot system failed to work and the liability attached to that failure.

When Self-Driving Cars Are at Fault

The sample size of higher level self-driving cars involved in accidents doesn’t really exist outside of testing by companies such as Tesla, which has logged the most test miles of driverless cars. Other companies – Google for one – have developed prototypes of driverless cars that are also in the testing phase.

The Insurance Institute for Highway Safety (IIHS) estimates by 2030 as many as $4.5 million self-driving vehicles will cruise U.S. roads but says these vehicles would not be fully autonomous. They would instead operate as self-driving cars under certain circumstances.

As it stands, regulations governing self-driving cars are fluid (making it even more important to consult an experienced accident attorney) and pose challenges for drivers trying to prove manufacturer liability.

In general, “fault” as it pertains to self-driving cars could include:

When Humans Are at Fault

Human error accounts for nearly 93 percent of car accidents, and it isn’t likely to decrease substantially in accidents involving the level of self-driving cars on the road at present.

Until the day completely autonomous vehicles populate the highway, expect the onus for liability in car accidents to fall on the operator.

Human error is the primary reason for self-driving car accidents, though mitigating circumstances do exist.

The first thing you should do is find an attorney experienced in such accidents. Given the possibility of filing your claim involving a manufacturer – whether it’s the other vehicle or your own – it’s critically important that you understand the regulations governing self-driving cars.

As is the case in all car accidents, the severity of injuries and the amount of damage are factors in whether you seek legal representation.

“If the injuries are serious, you’d want to look at all possible avenues of recourse,” said Walker.

Will Insurance Cover an Accident with a Self-Driving Car?

The reason is simple. There are still limits on what self-driving cars can do without a human at the wheel intervening. Tesla and other car companies require drivers to touch the wheel from time to time to keep it in autopilot mode.

As cars become more autonomous, the Insurance Information Institute says we might expect liability issues to change so that “lawsuit concerns do not drive manufacturers and their suppliers out of business.”

From the perspective of an attorney: Glass believes that when driverless cars take over the road, the cost to litigate smaller injury claims will be so high that it won’t be worth the trouble.

“As with a medical malpractice or products liability case with small injuries, we are going to see that the cost-benefit analysis will not favor the lawyer or claimant who brings such a case because the amount of time, effort, and money it will cost to pursue a meritorious case will not be worth taking on cases with only minor injuries.”

Glass added that it may not make sense to hire an expert to analyze the computer program for defects that would have caused the crash if the accident only resulted in smaller soft-tissue injuries.

The idea is that autonomous vehicles in the long run will reduce car accidents since technology will ultimately trump fatigue, distraction and human error in keeping us safer. But a consequence may be that smaller claims become too expensive to litigate.

For now, it’s too early to know exactly how autonomous cars will affect the insurance industry and manufacturer liability.

U.S. safety regulators reported in June that there were nearly 400 accidents involving cars with partially automated driver-assist systems. Those crashes included 273 Teslas during a period of 11 months from July 2020 to May 2021.

Hold on. Don’t trade in your Tesla based on those numbers. For one thing, the study did not track the amount of miles driven.

The National  Highway Traffic Safety Administration says Tesla has a higher capability of monitoring its vehicles and providing real-time crash data. Accidents involving other manufacturers weren’t reported as quickly and sometimes they weren’t reported at all.

In the meantime, drivers should proceed as if theirs is the hand on the wheel that will be held accountable for car accidents. 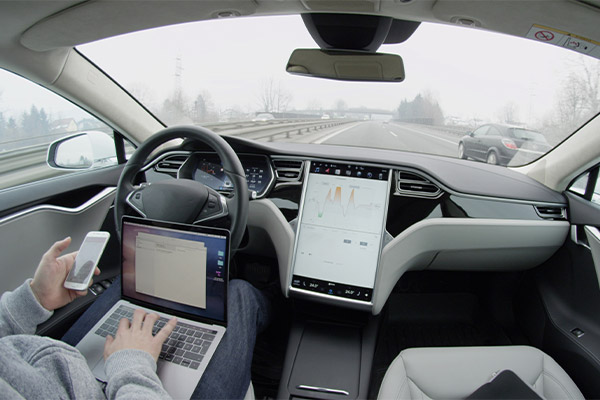