Who Pays for the Ambulance in a Car Accident?

Ambulances are a must in many car accidents, but who’s responsible for paying for a ride that could cost hundreds or even thousands of dollars?

When you’re injured in a car accident and need medical attention, an ambulance is your best chance of receiving timely treatment. The faster you make it to the hospital, the greater the likelihood of recovering from your injuries, though that ride could cost you an arm and a leg.

It’s no secret they’re not cheap, yet thousands are called upon to provide emergency transportation every day, mostly for riders we wouldn’t call rich.

So, who pays for all this anyway?

Will Car Insurance Cover the Cost of the Ambulance?

Insurance will take care of the cost for an ambulance when “medically necessary.” The insurance company will tack it on as another medical cost like surgery or medication.

However, most minor injuries fall short of requiring an ambulance, so insurance won’t pay for it if you’re simply sore or scraped up. Even if the accident wrecked your vehicle, insurance wouldn’t pay for a hospital ride just because your car won’t run.

Insurance deems an ambulance “medically necessary” when injuries require immediate medical attention. This means you’ve suffered broken bones, a spinal injury, severe burns, internal injuries, or a concussion. Sometimes it’s hard to measure the severity of your injuries in the heat of the moment. It’s better to play it safe and accept the ambulance if you suspect your injuries are worse than they appear.

There is no such thing as a standard ambulance ride. Each situation calls for a different approach, whether in staff, medication, treatment, or transportation. This makes it hard to gauge an average cost since numbers can vary nationwide. However, a few crucial aspects to keep in mind can help prepare you financially for an ambulance ride.

The laws in your state will specify the order your insurance pays out. The coverage you can purchase will vary as well. For instance, if you live in one of the 12 no-fault states, you must buy Personal Injury Protection (PIP). PIP is the first policy you will turn to after an accident to pay for an ambulance and other medical expenses. Live in a state without PIP? You likely will look to your medical payments coverage or the other driver’s bodily injury liability coverage as your first line of financial relief.

Insurance covers up to a certain dollar amount. We call this the coverage limit, and the policyholder sets it. When you reach this limit, you’ll have to resort to another policy or pay out of pocket. For example, PIP will cover up to $10,000 in medical expenses, including an ambulance. If your bill is $15,000, PIP will cover the first $10,000, and then you would use another coverage (like MedPay or underinsured motorist coverage) to tackle the rest.

Some hospitals may negotiate ambulance bills with uninsured patients or direct them to charitable organizations like the HealthWell Foundation that can help cover costs. However, this isn’t a guarantee. Check your local options to prepare yourself if an accident happens. Some areas offer ambulance subscription services for an annual fee. For example, the Wake County, North Carolina EMS program charges residents $60 a year in exchange for ambulance rides as often as they need. Some counties collect taxes to pay for ambulance rides, so residents don’t worry about footing the bill.

Onsite Treatment from EMT (No Ride to the Hospital)

Most ambulances won’t bill you if you don’t ride to the hospital. Even if the EMTs care for your injuries, the insurance company won’t pay for onsite treatment, so hospitals rarely charge. However, many people still report receiving bills after refusing treatment or a ride.

How to Pay for an Ambulance after a Car Accident

Covers medical expenses for drivers living in no-fault states. It pays for ambulance costs regardless of who caused the accident.

Sometimes called MedPay, this will treat an ambulance ride like any other medical expense. Medical payments coverage is only required in Maine and New Hampshire, but it is available in most states and relatively cheap.

When another driver causes your accident, their bodily injury liability coverage will pay for your medical bills, including the cost of an ambulance. This coverage is mandatory in most states, though not all drivers choose to carry insurance.

Uninsured drivers are more common than you think. In some states, they make up a quarter of the driver population. Uninsured liability coverage will pay for an ambulance ride if you’re injured and the driver responsible has no insurance whatsoever. Underinsured liability coverage comes into play when the at-fault driver has insurance, but not enough to cover your total expenses.

You can use health insurance to pay for an ambulance, but it often calls for a deductible, so you might have to pay out of pocket.

How Much Does an Ambulance Cost after a Car Accident?

The amount you owe will vary depending on your location, the distance you travel, and the type of ambulance (air or ground). Any treatment the EMTs administer will add to the cost of the trip as well.

Here’s some info to help illustrate why ambulances cost so much: 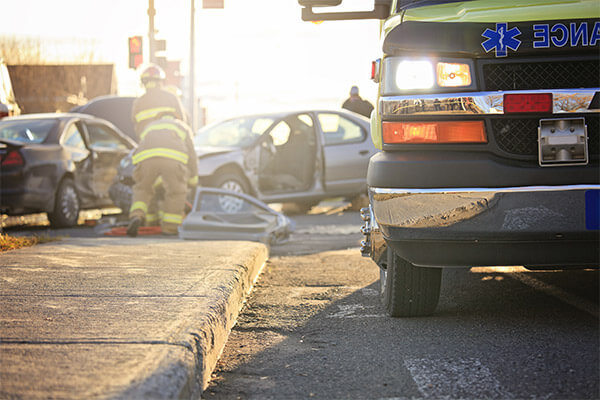