How to File a Workers Comp Claim in Florida

Workers compensation law exists to smooth the path to recovery for employees hurt on the job. But navigating the trip requires meeting deadlines, attention to detail, organizational skills … and, oftentimes, help from a lawyer.

On the workplace safety front, standards, equipment, and attention to workers’ well-being never have been higher, better, nor keener. For all this effort, however, workers still get hurt on the job. Lots of them.

In Florida in 2021, as the state began to re-emerge from the COVID-19 slowdown, the state Division of Workers’ Compensation processed 68,916 cases that paid a total of $1.32 billion in benefits, an average of $19,455 per injured worker.

Helping employees who are injured (or sickened) on the job receive just compensation is the aim of the statutes for workers compensation in Florida. But making certain the system operates properly usually involves proactive participation by the employee (and/or the employee’s attorney).

Deadlines for Filing a Workers Comp Claim in Florida

Filing a workers comp claim should be accompanied by a sense of urgency. It’s not just about deadlines — although those are paramount. It’s also about events that might occur between the moment you are injured on the job and when you notify your employer.

You wrench your back during your shift late on a Friday afternoon. The weekend looms. Maybe you give it a little rest and, come Monday, you’ll be as good as new. But Monday comes and the ache is still there. In fact, it’s worse. You report your injury and call out sick.

Now you want to file a workers compensation claim. But an entire weekend has passed, and there will be questions about how you spent your time off — questions designed to minimize the employer’s responsibility, if not absolve it altogether, questions that would not be asked if you had reported your injury to your supervisor immediately. Yes, even late on a Friday afternoon.

As a practical matter, the state of Florida sets the deadline for reporting a workplace injury within 30 days of the date of the incident. If it’s a doctor who pinpoints your work-related injury (repetitive motion syndrome, for instance) or illness, you have 30 days to report from the time the doctor broke the news.

Failing to notify your employer within the limits of the deadline may cost you some, or all, of your benefits. And, again, sooner is better than later, without exception.

“With any type of insurance claim, the closer in time the reporting occurs to when the event happens, the more seriously it’s going to be taken,” Sarah Raaymakers, a partner with the Law Office of Phillips & Raaymakers in the Tampa Bay area said.

Steps to File a Workers Comp Claim in Florida

The claim process unfolds between the insured employer and its workers compensation insurance company. Nonetheless, as the employee, you have a handful of obligations.

And it won’t hurt to have someone on your side.

“I recommend having an attorney from the beginning,” Raaymakers said. “Employees get denied because they wrote something on a form, it was unintentional, but inaccurate, and opened the door to a fraud denial. Having somebody to call before things get bad or before things get difficult, or before they get under a time crunch, is so much better.”

Represented by a lawyer or otherwise, here’s how to get started.

Tell your supervisor and/or a human resources liaison about the injury. Provide as much detail as possible, such as:

In all but traumatic/emergency/catastrophic situations, when treatment is of the utmost urgency, you can notify the appropriate contact verbally. But be certain to follow up in writing; an email, with a receipt notice and a copy for yourself, is sufficient.

It’s impossible to overstate how important the reporting portion of the process is. Says Raaymakers, “Step No. 1 is making sure that it’s reported and that there’s some written confirmation of that report.

“Even if it is unequivocal that the accident occurred in the course and scope of employment, if it’s not reported on a timely basis, it can completely jeopardize any benefits that workers are entitled to.”

Assume your claim will be carefully scrutinized, if not outright challenged. In this way, you may be happily surprised when all goes smoothly, but you’ll be prepared if pushback happens. To prepare, document all the evidence that you can.

“Ultimately, the burden is on the employee,” Raaymakers notes. “If there’s a dispute about how the accident occurred or whether they were injured on the job, yes, ultimately is their burden to prove that the accident happened, it was in the course of scope of their employment, and that their injuries are related to the work accident.”

Receive the First Report of Injury Form and Brochure

The official documentation of your claim begins with a First Report of Injury Form, which will be accompanied by a brochure from the state explaining what’s involved in filing a claim.

The form, designed to gather the information described above, becomes the first entry in your claim file. Be meticulous, precise, and accurate when filling out your portion of the form. Avoid understatement or exaggeration.

Check to make certain that the information entered by your employer is true and accurate.

Filing an Appeal If Your Claim Is Denied

It’s a fact of employment life: Sometimes, workers comp claims get denied. Typically, in Florida roughly 10% of claims are initially turned down. Rejections can happen for a variety of reasons. Some are minor and can be easily repaired at an informal meeting with your employer and/or employer’s insurance company. Others are complex and onerous. Reasons for rejection include:

A denial is not the end of the road. Instead, it may be no more than a detour that leads to a better destination.

Check with the Employer Assistance and Ombudsman Office (EAO) for help sorting problems short of going to court. If the EAO is unable to help, however, file a Petition for Benefits with the clerk of the Office of the Judges of Compensation Claims.

A Petition for Benefits includes the details of your incident, the type(s) of injury, whether you have suffered wage losses, and the benefits you seek. Your employer and insurance carrier will be notified; they must respond or pay your claim within 14 days.

The next step, assuming the employer/insurance company has dug in its heels, is mediation, which could take another 130 days. If you remain at loggerheads, the case could proceed to trial.

This is not all bad. A 2018 study by Lockton, a large insurance broker and risk advisor, showed two-thirds of rejected claims were paid within a year; moreover, claims that were initially denied but ultimately paid cost 55% more ($15,694) than claims accepted and paid as presented ($10,153).

Additionally, according to a national survey, injured workers represented by attorneys scored 30% higher compensation than those who represented themselves.

“It really is important to have someone who is familiar with workers comp,” Raaymakers says. “I’ve seen defense lawyers on the other side who very clearly were stepping in for some uninsured employer, and they were in way over their heads.” 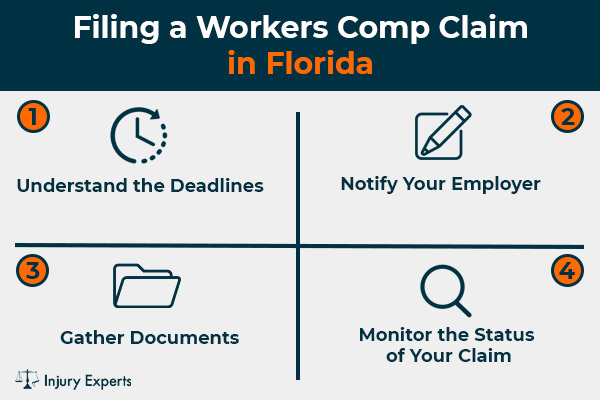