How Much Does Workers Comp Pay in Florida?

Floridians injured or sickened on the job are backstopped by workers compensation, a system designed to get employees back on their feet without having to sort out blame. How much an injured worker receives in benefits depends pay grade and the circumstances.

Floridians get hurt on the job with a fair amount of frequency. Stuff happens. Accidents. Repetitive motion. Toxic conditions. Even undue stress can put a good employee on the sidelines.

When the stuff that happens at work means an employee is unable to report for duty for an extended period, workers compensation typically kicks in.

A system authorized by the Legislature that helps employees recover from their setbacks without the hassle of sorting blame, workers comp in Florida provides wage-replacement benefits, pays medical expenses, and sometimes covers retraining costs, among other things.

How much does workers comp pay? Let’s have a look.

Employees unable to report to their jobs as a result of a work-related injury, condition, or illness for at least eight days, are eligible for lost wage benefits.

On the downside, it’s not a boatload of money. Workers comp sets the payment for lost wages at 66.67% of the worker’s weekly wage in Florida, up to $1,099 for work-related injuries or illnesses occurring after January 1, 2022.

On the upside, workers comp benefits generally are not subject to income or payroll taxes, which helps the sidelined employee creep a little closer to being made financially whole.

On the complicated side, lost wage benefits hinge on the severity of the work-related injury or illness. The medical diagnosis — and, thus, the decision — regarding your condition is provided by your doctor, who is authorized by the employer’s workers comp insurance company.

Regarding this, it is best to be wary. As Tampa Bay area plaintiffs attorney Sarah Raaymakers notes, “The way insurance companies stay in business is by collecting premiums and denying claims.” Good to know.

If your authorized doctor says you cannot work as a result of your injury/illness, you qualify to receive 66.67% of your regular wages (up to the state maximum) at the time you were hurt, or your illness was reported.

Unless they are sidelined more than 21 days, workers will not receive temporary total disability benefits for the first seven days. The determination rests with the authorized doctor.

Wait. There’s more: Certain severe injuries may entitle a worker to receive 80% of their regular wages for up to six months after the incident. Again, it’s your authorized doctor’s call.

Florida law provides for up to 104 weeks of temporary disability benefits — again, how long workers comp lasts in Florida is based on the judgment of the authorized doctor.

When (or if) you are cleared to return to work — with restrictions — by your doctor, you may be able to collect Temporary Partial Disability Benefits if you are earning less than 80% than you did at the time of your accident.

As with Total Temporary Disability benefits, workers can collect TPD for up to 104 weeks.

Workers who have achieved MMI, or are within six weeks of their TTD benefits expiring without reaching MMI, will be evaluated by their doctors for enduring medical conditions or lost functions (impairments) resulting from their work-related incident.

Those who are able to return to the work force in some capacity, will be assigned an impairment rating which will be used to calculate the duration of permanent impairment benefits, based on a formula provided by Florida statute.

Weekly benefits will equal 75% of the worker’s TTD rate (limited by the same legal maximum). However, the rate is cut by half for workers earning at least as much as they did before they were hurt or fell ill.

Sometimes, a worker will be unable to return to gainful employment, even a low-key sedentary position. If that is the case, the worker qualifies for Permanent Total Disability benefits. PTD is paid at the same rate as Temporary Total Disability — 66.67% of the employee’s regular wage at the time of the event — but continues until the worker reaches the age of 75 (or indefinitely if the worker doesn’t qualify for Social Security benefits).

Once more, the determination of PTD rests with the authorized physician. However, certain severe injuries — the loss of a limb or a severe brain injury — are automatic qualifiers.

Medical expenses required to treat a work-related injury or illness are covered by workers compensation … so long as the treatment was prescribed by the authorized doctor and covered by the insurance company. This can prove to be a dicey area, Raaymakers says.

“A lot of the time, you’re not arguing over whether the accident occurred or who was responsible for it because it really doesn’t matter,” she says. “It’s usually more fighting over what benefits does the person need and are there injuries related to the accident as opposed to something else.”

Under workers comp, employees also can recover the cost of traveling to and from doctor’s appointments, rehabilitation centers, and to get prescribed medicine.

Employees whose injuries or illnesses that prevent them from returning to their previous job may receive, through workers comp, a variety of services designed to help them secure alternative employment.

Workers may qualify for job placement services, vocational counseling, and other services. Additionally, workers comp can pay for training or education to help with acquiring suitable employment, from 26 to 52 weeks.

Workers comp steps in when a job-related injury or illness culminates with the employee’s death. Dependent relatives — not limited to the worker’s spouse and children — can receive death benefits.

The amount hinges on the number of qualified dependents, but it cannot exceed the worker’s maximum temporary total disability payout (two-thirds of the normal wage times 104 weeks), up to  $150,000.

Workers comp also pays up to $7,500 for funeral and burial expenses. 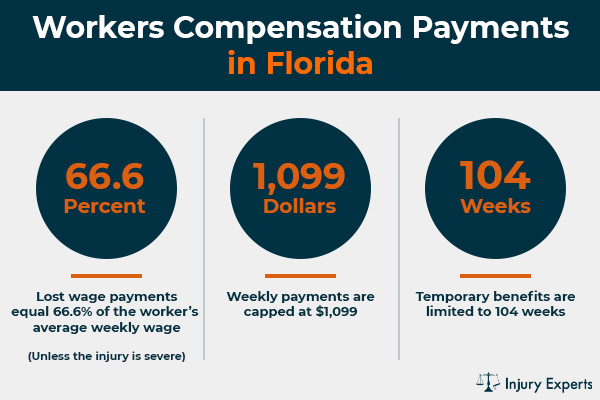