Can I Sue My Employer for Not Having Workers Compensation?

Employees hurt on the job who discover their employer doesn’t have workers compensation insurance are the literal definition of adding insult to injury. Luckily, there are avenues of relief, including suing the negligent employer for compensation.

Workers compensation laws are, on balance, a good thing. Properly applied, the system helps workers injured on the job get the care and support they need in a timely fashion while sparing everyone the hassle of arguing over which side was at fault.

One is to apply for relief through their state’s uninsured employers fund. Another is to file a personal injury lawsuit against your employer. Making a properly informed decision — usually, you can’t tap state benefits and sue — requires consulting an experienced workers comp lawyer.

Is It Illegal to Not Have Workers Comp?

A straightforward question deserves a straightforward answer. Unfortunately, no simple response is forthcoming. Congress has been, possibly wisely, silent on the matter. As a result, workers compensation operates at the state level across the United States.

Because state legislatures are not uniform in their workers compensation statutes, the answer to the question above is: Almost always … but it depends.

Roughly three quarters of states exclude workers employed on farms. Some states do not require coverage for real estate agents or taxi drivers.

Where employers are required to carry workers compensation insurance, failure to comply can result in civil fines in the thousands, shutting down the business, and even jail time for the negligent business executive(s).

With nuances prevailing across the country, it’s not surprising that prudent workers compensation lawyers talk almost exclusively about how the laws apply in their states.

State authorities will deal with employers who fail to comply with statutes, but they rarely intervene on behalf of individual employees. Instead, workers injured or sickened on the job where no workers comp coverage is present need a lawyer familiar with the local landscape.

Suing Your Employer for Not Having Workers Compensation Insurance

It’s never a bad idea for an employee with a workplace injury or illness to consult a lawyer. That’s right. Never a bad idea. Even if there’s workers comp insurance in place and, from your perspective, you’re being treated appropriately, an early visit with a workers comp lawyer — almost always, free and without obligation — will reveal whether you are receiving the appropriate level of benefits.

“No matter what state you reside in, it’s a wise idea to retain a lawyer,” says Adrienne Hines of Sandusky, Ohio-based Kademenos, Wisehart, Hines, Dolyk & Wright Co. LPA. “Workers’ Compensation laws are complicated and legal expertise will help you navigate the red tape, plus address any uncertainty you may have.”

If, on the other hand, your employer lacks workers comp coverage, consulting and ultimately retaining a workers comp lawyer should be no deeper than No. 2 on your must-do list.

Why the rush? Your attorney has lots to do:

“You should expect your attorney to investigate the facts of your case and develop a litigation strategy that will maximize your personal financial recovery,” Sullivan says. “In these lawsuits, the only person on your side is your attorney.

“Most work-related injuries affect the injured worker physically as well as financially. Your lawyer needs to understand that any settlement or verdict must take into the account the lost earnings, medical insurance, and other benefits that a worker’s’ family depends on. To that end, your lawyer must be prepared to go to trial and retain top experts in this field — for example, vocational rehabilitation, life care planner, and an economist — to substantiate the financial award being sought.”

The only acceptable reason not to make the lawyer No. 1 is if you are able, immediately, to preserve the scene of the injury (and your injuries themselves) on a smartphone. Shoot lots of photos and video. Or, if you’re unable, ask a trusted coworker.

Also, make notes to help your memory. What happened? Who was there? Do you have their contact information? Again, employ your smartphone; use the voice-recorder app you downloaded just in case.

Thereafter, act quickly. Most states provide a year or more from the date of the injury to file a workers compensation claim. But the window for reporting your work-related injury/illness to your employer is far smaller, typically 30 to 60 days, and sometimes less. Without the report, the claim cannot be initiated.

If the employer was without workers compensation insurance, an injured worker may be able to tap a state fund designed specifically for that purpose. However, in reality, to recover appropriate compensation for the results of your injury(ies), medical bills, lost earning capacity, you may have to file a personal injury lawsuit against the employer.

This you absolutely should not attempt on your own.

“If you are hurt on the job, and your employer lacks workers’ compensation insurance,” Sullivan says, “it is critical to get the courts involved. It is dangerous to start and negotiate with your employer privately as they may want you to enter into a settlement with them privately that will not fully protect or compensate you.”

Getting the ball rolling involves filing a complaint, or petition, with the appropriate court. A formal legal document, the complaint lays out the legal and factual foundation of a personal-injury lawsuit. To wit: Here’s what happened, and here are the laws the defendant broke contributing to the mishap.

The complaint also explains why a court has jurisdiction to hear the case.

The complaint describes what relief the plaintiff is seeking, including a minimum amount of money (damages) demanded. It’s not unusual for states to assign personal-injury lawsuits to courts depending on the amount sought. In Florida, for instance, lawsuits seeking up to $30,000 are assigned to county courts; demands for more than $30,000 are tried in circuit courts.

The complaint concludes with the plaintiff’s signature, or that of the attorney representing the client bringing the suit.

The process in which each side receives and reviews its adversary’s legal claims and defenses is known as discovery.

Each side exchanges interrogatories, or lists of questions, and requests documents. Failure to honor these requests in a timely fashion can trigger charges of contempt of court.

Usually, each side will take depositions — on-the-record, under-oath interviews — of all relevant witnesses. Witnesses can be accompanied and advised by legal counsel.

How long discovery takes hinges on the court’s schedule and the complexity of the case. It may stretch from six months to a year.

Mediation is the process by which most lawsuits are resolved. With the expense, time, and uncertainty of a jury trial weighing on both sides’ minds, attorneys and their clients often attempt to avoid courtroom kerfuffles.

Sometimes, opposing counsels can settle a case by negotiation. The next step is to attempt mediation, a process in which both clients and lawyers go before a neutral arbitrator in an attempt to find common ground. With the two sides in separate rooms, the mediator shuttles between the parties until there is an agreement, or a deadlock.

If mediation fails, the case is scheduled for trial. This doesn’t necessarily mean it will go to trial; cases often are settled on the morning a trial is set to begin. The fact that a jury of utter strangers is about to be seated frequently focuses the contestants’ minds.

Although the presiding judge always will attempt to keep the proceedings moving briskly, personal-injury trials follow unique timetables. Some last a day. Others stretch for weeks, even months.

Ultimately, assuming no last-minute settlement is achieved, the trial commences. Opposing cases are presented, the stories told and the legal issues argued. When each side has rested its case and delivered final arguments, the judge will charge the jury, explaining the applicable laws directing the panel to decide the outcome, and to award damages, if any.

Sometimes, judges allow a personal-injury case to be bifurcated, or split into halves. First, a jury will decide whether the defendant is liable for the plaintiff’s injuries, and to what degree. Then, and only if they rule against the defendant, will the jury hear the arguments about damages, which tend to be more emotional.

Appeals are the near-inevitable outcome of civil litigation. At appeal, the loser will not argue the merits of the case — appellate judges rarely overturn what are known as “juror questions” — but instead will note outcome-influencing errors made by the trial court judge.

Conceivably, appeals can linger for years, pushing expenses for both sides ever higher; meanwhile, the two sides can continue to negotiate a settlement.

Whether it’s in the best interest of the injured employee to invest so much time, energy, and emotion into a lawsuit is an open question. That’s why choosing wisely is best accomplished under the guidance of lawyers trained in workers compensation and personal injury law. 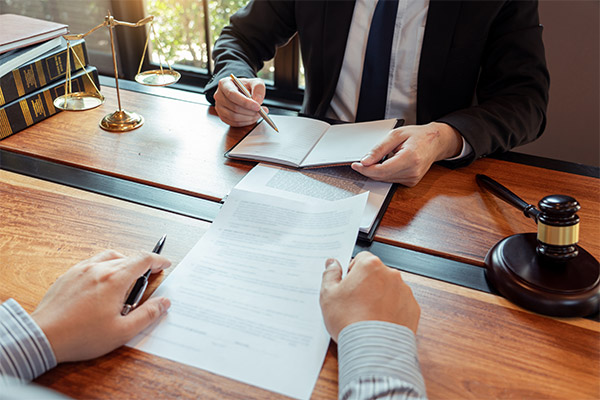