Can You Quit Your Job While on Workers Comp?

Workers compensation can be a dizzying maze under the best circumstances. But those twists and turns grow more complicated when injured employees quit the workplace where they were hurt.

One unanticipated ripple effect of the recent pandemic is the number of working-age Americans who feel liberated to switch or resign jobs for most any reason, or no reason at all.

Accordingly, we will not attempt to anticipate why you might have arrived here seeking answers to a serious, and potentially urgent, question: Can I still get workers comp benefits if I quit my job?

“A workers compensation claim is simply an insurance claim that is processed when someone is injured at work,” says Sandusky, Ohio-based workers comp lawyer Adrienne Hines. “It doesn’t matter whose fault it is; an employee is entitled to four basic items in a claim.”

All that established, we will add this on the should-I-quit front: It is not unusual for someone who was injured (or sickened) at the workplace to have serious reservations about returning to the same company, or even the same line of work somewhere else. If that describes you, you don’t want to feel trapped by bureaucracy.

On that score, we have good news, as well as news about which you must be careful. This uncertainty is reason enough to consult a workers compensation lawyer before you make a major decision about whether to stick with your job.

Can You Still Get Workers Comp If You Quit?

There’s no simple blanket answer to the question at hand. The best we can do in a single paragraph is: It depends. Some benefits may well continue. Others could suffer.

Sorting this out involves assorted factors, such as where you are in your recovery; the benefits for which you’re eligible; the reasons driving your decision to quit; and which state’s workers compensation statutes apply. (Usually, it’s the state in which you work.)

Be wary of anyone who attempts to apply, for instance, Illinois workers comp laws to Arizona, Georgia, or even next-door Indiana. State-by-state nuances in workers comp statutes can have a profound impact on your case.

As long as your physician recommends continued treatment, medical benefits linked to your workplace injury (or illness) continue until you have achieved maximum medical improvement (you’re back to 100%, or further treatment would be fruitless), without respect to your employment status.

As of 2022, only seven states completely exclude coverage for stand-alone cases of PTSD; nine states are silent. The other 34 provide PTSD coverage (through statute or case law); however, the burden of proof of workplace linkage rests with the injured worker.

Do you have ailments or conditions unrelated to your workplace injury? Account for these before making a decision that would leave you without healthcare coverage.

Otherwise, “workers” is the operative term.

Rules vary by state, but, typically, lost-wage benefits are tied to employment. Tendering your resignation almost certainly will stop that flow of income.

In Ohio, for instance, “an injured worker is not allowed to be paid wage replacement if they’ve ‘voluntarily left the workforce,” Hines said.

Consider the person who simply wants to retire. “If someone retires and no longer works anywhere,” Hines says, “the potential value of their claim declines because the possibility of wage replacement value is gone.

“However, the numbers are complicated, and as a rule, I rarely tell anyone to quit or not to quit based on their workers’ compensation claim.”

Submitted for your consideration: Most likely lost, too, would be health insurance, accrued leave time, and 401(k) matching payments.

Notably, quitting is distinctly different from being let go. If you’re fired or laid off while receiving workers comp benefits (either not yet back to work, or on modified duty), you may qualify for a full wage-replacement benefit until you reach maximum medical recovery status.

Should You Settle Your Workers Comp Claim Before Quitting?

Ostensibly, your employment status should not affect the status of your attempt to reach a settlement. Again, each situation has its unique considerations.

“If an injured worker is going to settle a workers compensation claim in Ohio, where they are in the process matters, and can affect whether they should or should not seek new employment,” Hines said.

Or even quit outright.

Again, Hines speaks specifically regarding what’s what in Ohio. However, workers comp lawyers across the country recommend hanging in there until your settlement is secure.

Workers who chuck it all before there’s an agreement sacrifice vital negotiating advantages. For instance, your employer may require your resignation as part of a settlement. Your (at least initial) refusal is a bargaining chip. If you’ve quit, you’ve tossed away that chit. So, there’s a clear downside.

In fact, it’s virtually impossible to imagine any scenario where your hand is strengthened by quitting before reaching a settlement.

As long as you’re on the payroll, it’s in the boss’ interest to smooth your path back to active duty. That means quickly approving medical care and rehabilitation to help speed your recovery. Where’s the incentive to be proactive if you’ve quit?

And you certainly don’t want to resign before your claim has been filed. Even if it’s 100% valid, filing after you’re out the door automatically triggers suspicion in your former employer and its insurance company. You’re gone without a peep, now here you come asking for medical care, claiming a condition that could lead to a lump-sum payout? Hmmmm.

So, if your mind is made up, try not to quit before the details are buttoned up — including sticking around until your physicians declare you have reached maximum medical improvement. We established above your medical benefits will remain in force until you’ve achieved MMI. But staying on the payroll enables you and your attorney the luxury of time and experience for calculating your losses, helping determine what constitutes a proper settlement.

More reasons to stick around:

This does not mean there never are valid reasons for quitting while you’re receiving workers comp benefits.

If that last scenario rings true, you need an experienced workers comp lawyer sooner, not later. If you can prove your old workplace is unsafe or makes you miserable, you may be able to keep your wage-loss benefits intact while you sort out the rest.

“Globally speaking,” Hines says, “I can’t say whether it’s best to settle before you leave a job or after, because the nature of someone’s injuries plays a large role in how we advise our clients.

“Still, I can say with certainty that this is a complicated area of law, and anyone injured at work needs to talk to a reputable attorney who practices in this unique area of law before you decide to leave an employer where you were injured.”

In short, do your best to stick it out just one more day. Quitting may yield satisfaction in the moment, but it’s not the best tactic for getting what you deserve. 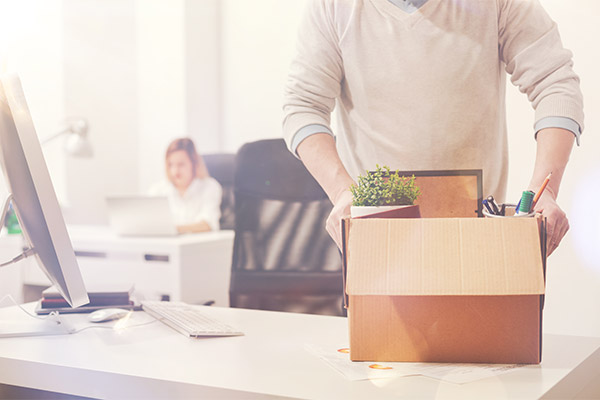