Who Is at Fault in a Rear-End Collision?

Rear-end collisions, the predominant traffic crash, happen with alarming frequency. Sorting out who’s at fault (you may be surprised), the nature and extent of resultant injuries, and getting to an appropriate settlement are all part of the road ahead.

If it seems you can’t complete your daily commute without having to detour around the aftermath of at least one rear-end collision, you’re not imagining things. Of the whopping 6.76 million crashes recorded nationwide in 2019 (before COVID disrupted everything), 2.2 million — 32.5% — were rear-end collisions, by far the most frequent.

Fortunately, according to statistics provided by the National Highway Traffic Safety Administration, nearly three-quarters of those wrecks result in property damage only. But for the rest, nearly 600,000 car accidents, injury and even death figure into the outcome.

Keep that in mind as you sulkily maneuver around the crumpled metal and through the strobe of emergency vehicle lights. There, but for fortunate timing (and perhaps well-practiced safe-driving skills), could have been you.

Unless it was you, of course, and for one reason or another — victim or perpetrator — you’re the one on the roadside, mobile phone in hand ringing loved ones as you survey the wreckage and assess your physical trauma, vaguely aware of gawking gawkers rolling past.

At critical moments such as these, your mind races. Am I OK? Am I hurt? Is it bad? My legs are tingling — is that adrenaline or an injury? Did my life just change in an instant? Wait. Did I do something wrong? Was it my fault? What should I do?

Without fixing blame just yet, let’s address this prickly truth at the top: Most rear-end collisions result from driver negligence. Common causes of rear-enders include:

So here we are: Maintaining a safe distance from other vehicles at all times is the definition of a motorist being in control of his/her vehicle. That simple truth is why, generally, the driver who rear-ends the car ahead is liable for the damages that result.

“Ninety-nine percent of the time,” says attorney Tyler Kobylski, of Chicago-based Staver Accident Injury Lawyers P.C., “it’s the person who struck the person from behind. Mainly because drivers are expected to keep a safe, reasonable distance from the vehicle in front of you.”

Generally and absolutely are not synonyms. It is possible to be on the receiving end of a rear-end collision and still wind up bearing some, or even a substantial, portion of the liability.

“The driver who rear ends another is legally presumed to be at fault,” says Boca Raton, Fla.-based personal injury lawyer John Willis. “However, in certain cases, the presumption can be overcome where there is a sudden stop by a driver at a time and place where it could not be reasonably expected.

“For example, a driver who abruptly brakes in bumper-to-bumper accelerating traffic or a driver in traffic who suddenly, without warning and for no good reason, slams on their brakes.”

To recap, the lead driver may bear some or all of the blame in the event of:

“Ultimately,” Willis says, “the question is whether the first driver who was rear ended did something negligent that partially or completely caused the rear-end accident.”

Then, Willis concludes, getting at a legal car accident settlement becomes problematic; the meting-out of liability often becomes a question for a jury.

Lawyer Willis, who has seen and litigated his share, says this about rear-end collision injuries:

“[They] can be as a minor as a strain or sprain or as severe as death. The extent of the injuries is dependent upon the speed of the vehicles, use of seatbelts, the safety and construction of the vehicles, the age and physical health of the occupants and the force and location of the impact.

“Some injuries, which may occur naturally as part of aging – such as spinal disk injuries in older people – are harder to prove … were caused in the collision. Other injuries, such as broken bones, lacerations and death, are much less difficult to prove causation.”

If you have been injured in a rear-end collision, you may want to seek representation from an experienced personal injury lawyer. As Chicago’s Kobylski notes, “People typically experience whiplash injuries, broken bones, head injuries, cuts and gashes, soft tissue injuries, and back injuries. … In my experience, these types of injuries aren’t any harder to prove than others for a successful claim.” 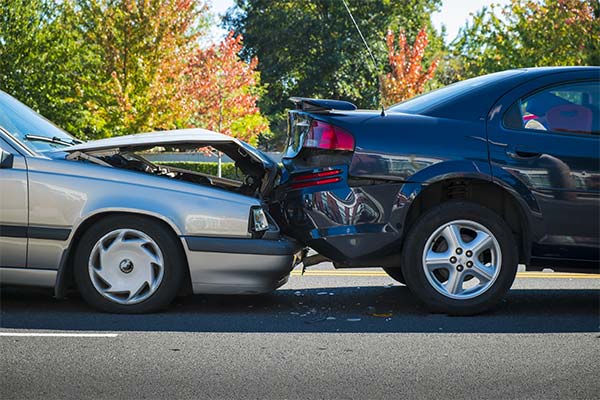 Home » Car Accident » Fault » Who Is at Fault in a Rear-End Collision?