Who Is at Fault in a Parking Lot Accident?

Parking lot accidents can lead to serious damage, despite lower speeds. If they involve pedestrians, they can also result in serious injury, even death. Determining fault can be even more complicated than an accident on the open road.

Parking lots are a breeding ground for car accidents, even when drivers aren’t fighting for the same space like combatants in the “Hunger Games.” This is especially true in busier lots with multiple exits and entrances.

Throw in variables such as increased pedestrian traffic and poor sightlines, and you might get a day that begins carefree, but ends with drivers exchanging contact information and calling their insurance companies to find out how much of a spike they can expect on their rates.

Parking lots require drivers to keep their heads on a swivel. Traffic can come from any direction. But even staying alert is no guarantee another driver will see you backing up or a shopper weighed down with packages won’t unknowingly step into harm’s way.

Even though low speed accidents don’t typically translate to a high risk of bodily injury, sorting out fault in a parking lot accident can be just as complicated and stressful as highway collisions that require EMTs and police on the scene.

Who Has the Right in a Parking Lot Accident

The same right-of-way rules on the open road generally apply to parking lots. A rear-end collision, for instance, almost always points the finger at the driver who failed to stop the vehicle before striking another from behind.

So, too, with left-turn accidents. The driver turning left is more times than not at fault for not ceding the right of away.

However, a few factors do make parking lot accidents unique. One is the preponderance of accidents involving pedestrians walking in between cars and into the blind spot of drivers backing out of spaces.

Backing Out of a Parking Space

Backup cameras and rear cross-traffic alerts on newer cars may give drivers warnings while backing up, but two cars backing into each other is still a common incident in a parking lot.

In those cases, both drivers often share percentages of blame for an accident in which both cars suffer rear-end damage.

It’s legally incumbent on each driver to make sure they don’t back into another vehicle or a pedestrian. But the assessment of blame might not be 50-50 if one driver (with help from eyewitnesses or surveillance cameras in some cases) can prove he or she began the process of backing out first.

If you back into a car exiting or entering a parking lane, you’re almost always found negligent unless the other car in the accident was speeding or driving recklessly.

Pulling into a Parking Spot

Distracted driving might even be a bigger issue in parking lots than elsewhere because drivers are often texting arrival or departure information to friends and family while still moving. Just because you’re driving at slower speeds or inching out of a parking spot doesn’t make texting any safer.

If you sideswipe a car while pulling into a parking space, it’s going to be difficult to dodge the blame. So, too, if you collide with the parked car directly in front of you.

Where liability becomes more challenging to determine is when two cars are pulling into opposing parking spaces at the same time, especially when one or both cars try to pull through from the parking space they first occupied into the one directly in front of them to avoid backing out when exiting the lot.

You shouldn’t assume you’re at fault in this scenario, or that the other driver’s negligence is obvious.

A free consultation with an experienced accident attorney can help sort out negligence claims that might typically hinge on eyewitness and/or surveillance camera evidence.

The onus to respect right-of-way rules is almost always the same in parking lots as on roads and highways. The burden falls on the driver turning left to make sure the coast is clear before executing the change of direction.

If speeding or reckless driving is involved, the burden of proof is on the driver turning left to show how that kind of negligence trumps his or her own obligation to cede the right-of-way.

Blame for most rear-end collisions falls on the rear driver, whether the accident involves just two vehicles or, say, multiple cars involved in a chain-reaction collision. The latter type of accident is obviously less typical in low-speed accidents common in parking lots.

The more common rear-end collision in a parking lot occurs when the rear driver is distracted or makes contact when the forward driver stops abruptly to avoid a pedestrian or another car pulling out of a parking space.

Again, the rule is that if you hit a car from behind, you better have convincing, extenuating circumstances such as faulty vehicle equipment or inclement weather or you’re probably responsible.

Your chances of avoiding liability are not good – which might make a call to an attorney with experience in these types of accidents all the more important.

Pedestrian Accidents in a Parking Lot

These are both scary and more common than you might expect. Parking lots ask that drivers and pedestrians mix in a confined space, often filled with challenges and obstacles.

It’s a mistake to think that with cars mostly traveling at low speeds that parking lot accidents don’t involve serious injury. When the accident involves a pedestrian, serious injury and even death can occur.

The same liability rules apply, since pedestrians – like drivers and cyclists –  have a legal obligation to follow traffic rules.

Did the pedestrian run out from between two parked cars and not allow a driver reasonable time to avoid contact? At night? Wearing all black? Or was that pedestrian struck in a crosswalk in daylight?

Sorting those even more conflicting details will determine liability in a parking lot accident involving pedestrians and drivers.

Who Pays for Vehicle Damage in a Parking Lot

Determining that a business owner failed to operate a safe parking lot – maybe a construction project or misplaced signs led to a dangerous environment for cars as well as pedestrians – would require the same level of collected evidence to prove your case as would a negligence dispute between two drivers at a busy intersection.

The general rule is to file a police report at the time of the accident and call your insurance company to speed the process of recovering damages.

What if you come out of a store and find your vehicle damaged but the other driver has left the scene without leaving a note with their contact information?

This scenario happened to me in Ohio. Eyewitnesses gave me the license plate and color of the car. Even gave me their own contact information, all of which I included in a police report. But I was told the hit-skip unit of the local police department was still working on cases from three years previous.

The case went unresolved while I owned the car. Since the damage amounted more to scrapes than dents, I eventually took care of it on my own and later sold the vehicle.

In the case of the other driver leaving the scene and never being located, your insurance company would typically cover the damage minus the deductible.

No-Fault States: What to Do After a Parking Lot Accident

No-fault states – there are 12 of them – have laws that require a type of accident insurance that pays regardless of which driver was at fault. So, each driver involved in a parking lot accident would file with their insurance company.

Sounds simple. But when the damages exceed the coverage, filing a lawsuit to recover your losses may yet become your best option.

That’s why the usual steps at the scene of an accident are important: filing a police report, gathering evidence, making notes at the scene and obtaining any eyewitness contact information or testimony.

It’s often the case, especially in parking lot accidents, where there is shared negligence, that your best option is a free consultation with an attorney to help navigate the complications that frequently arise. 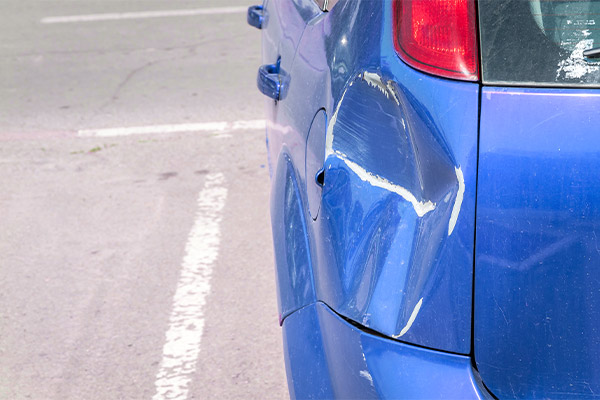 Home » Car Accident » Fault » Who Is at Fault in a Parking Lot Accident?