Is Hydroplaning an At-Fault Accident?

If you hydroplane and cause a car accident, you can’t always blame it on the rain. How you are driving and the condition of your tires has a lot to do with who is at fault in a hydroplane accident.

There’s nothing more frightening than suddenly having no control over your vehicle. And that’s what happens when you hydroplane – water on the road causes a layer between your tires and the pavement and suddenly there’s no traction.

“When the tires are skimming on the water, the driver loses control of the vehicle, unable to brake and steer,” said Bryon Bromley, a former insurance adjuster who blogs about driving safety at AdjustYourDrive.com. “If you’re lucky, your tires will regain contact as you slow or leave the standing water and you can continue driving safely. If you’re not lucky, your vehicle may veer sideways or spin, leaving your lane or leaving the roadway entirely.”

A hydroplaning accident is frequently an at-fault accident. Most hydroplaning happens because drivers are going too fast for the conditions. It can also happen when they make sudden lateral moves or turns, are driving with worn tires or have poor tire pressure. Tire treads are designed to move water through the surface of the tire, allowing the rubber to maintain contact with the road. Speed and quick maneuvers, as well as worn tires or bad tire pressure, don’t allow tire treads to work the way they’re designed.

The U.S. Department of Transportation found that 10% of motor vehicle crashes over a five-year period were caused by rain, and 46% of overall weather-related crashes involved rain. A recent study using weather radar data shows that even a light rainfall increases the chance of a fatal vehicle accident by 27%, and the probability rises with the heaviness of the rain, to 34%.

If you hydroplaning and cause an accident, you can be found at fault. There are some situations where a manufacturer, the municipality responsible for maintaining the roads or another driver may be found at fault, but those are less likely and hard to prove.

Who Is at Fault in an Accident Caused by Hydroplaning?

A hydroplane car accident may be weather-related, but that doesn’t mean the weather is at fault.

If it’s raining, even lightly, drivers are obligated to slow down, put distance between themselves and other cars, use turn signals so others can react in time and not make sudden maneuvers. Drivers are also expected to be sure their vehicle is in good shape, including tires that have enough tread to handle wet pavement.

That includes driving in rain, which is “there to be seen.” If a driver doesn’t adjust to the conditions, the driver’s negligence likely will be found to have caused the hydroplaning.

If it’s a nice day, the different circumstances may lead to a different fault outcome, Young said.

“If a driver is proceeding on a sunny day and happens upon a pool of water that could not be anticipated, such as runoff from a person’s sprinkler, and hydroplanes, it could be argued that the driver was driving in a reasonable fashion under the circumstances and could not be faulted for hydroplaning.”

Some of the most common situations in which a driver can be found at fault in a hydroplane accident are:

To avoid being found at fault in a hydroplane accident, the best rule of the road is to slow down and drive with care in wet weather. Being vigilant no matter what the weather also will help avoid accidents – and fault.

“Each state words their statutes differently, but in every state the driver is responsible for maintaining a safe speed for the conditions on the roadway,” Bromley, the former insurance adjuster, said. “Drivers need to be aware of the weather and watch out for obstacles in the roadway, including standing water.”

Ways to Avoid a Hydroplane Accident

If your car starts to hydroplane, don’t hit the brakes – take your foot off the gas pedal and steer in the direction the car is traveling. When you feel traction again, don’t jerk the wheel or over-correct, but smoothly accelerate and get the car back where it’s supposed to be.

“Ultimately, in all cases, the driver holds the responsibility to drive according to road conditions,” Louis Patino, of Patino Law Offices, said.

Other Parties That May Be Liable for Hydroplaning

In most hydroplane accidents where fault is found, it’s the driver who hydroplaned who is at fault.

But it’s also possible for other drivers to be at fault or to share fault. For instance, if a car cuts you off on a wet highway and you have to swerve to avoid it, and hydroplane, that driver would likely be at fault.

There are also circumstances, though hard to prove, where the vehicle or road itself may be found liable.

If your car hydroplaned because the brakes or tires had a product defect (as opposed to lack of maintenance or care on your part), you could make a case the manufacturer was at fault.

For instance, a tire manufacturer could be at fault “if it can be proven that the design of the tire is faulty by not allowing water to properly disperse,” Patino said. That can be difficult to prove in court, though. “In some jurisdictions, the plaintiff needs to show that a safer alternative design existed and that it was feasible for the manufacturer to design the tire in this way,” he said.

Bromley said proving manufacturer fault in a hydroplane accident isn’t likely. “A manufacturing defect in your vehicle or tires may cause a different type of problem, but usually wouldn’t cause hydroplaning without the driver choosing to drive across water at speed,” he said.

If the road was poorly maintained, there was poor drainage, or some other chronic issue that caused hydroplaning, it may be possible to claim the municipality responsible for the road is at fault.

That, though, is also difficult to prove.

“Courts are usually protective of municipalities, as they are funded by taxpayers, even if they have insurance,” Young said. “The governing concept here is whether the municipality was, ‘on notice’ that a particular road regularly floods and caused drivers to hydroplane. The question then becomes, ‘Does the municipality have to fix the problem and at what cost, or simply put up warning signs such as, ‘beware road floods.’? It becomes a balancing act of assessing how severe the danger is and what would it take, economically and otherwise, to fix the problem.”

Proving a corporation or municipality to be even partially at fault in a hydroplane accident “would be an uphill battle,” Bromley said. “You would need an experienced lawyer to navigate the legal system.”

The good news is that hydroplane accidents are usually covered by insurance.

Liability insurance, required in 49 states, pays damages, including medical expenses, for the other driver or drivers if you are at fault in a hydroplane accident.

Collision insurance, which pays for your damages, usually covers hydroplane accidents as well.

It’s a good idea, though, to review your auto insurance, because every policy is different. If hydroplaning isn’t covered, you may want to get comprehensive insurance, which covers accidents and other damage that collision and liability insurance don’t.

Whose Insurance Pays in a Hydroplane Accident?

As far as the insurance companies are concerned, fault in a hydroplane accident is treated the same as it is in any other accident.

In the 12 no-fault states, each driver’s insurance covers their own damage and injuries, though an at-fault driver can be sued by the other driver or drivers if their injuries exceed what their insurance will cover.

Young said the fact insurance will cover a hydroplane (or other) accident, particularly if you are at fault, is why people buy it.

“It’s to protect us, if because of our negligent conduct, (driving) we cause an accident, in whole or part, and someone is injured,” Young said. “No different if we cause an accident by driving through a red light or stop sign. In all these situations your insurance company is contractually obligated to defend you and pay damages up to the amount of insurance you purchased.”

If you are at fault and don’t have insurance, you are still liable for the other driver’s costs in at-fault states. If the other driver has uninsured motorist coverage, their insurance will cover their damages and medical expenses, but the insurance company may sue you to be repaid.

Should You Hire an Attorney After a Hydroplane Accident?

Determining fault in a hydroplane accident, particularly if more than one car is involved, can be tricky. If you believe you were not at fault, an experienced car accident attorney can look at all the elements and determine if you have a case. An attorney also is experienced at investigating whether there is a case for fault with the other driver, the manufacturer or the road conditions.

“There are always possibilities,” Bromley said. “If you suspect your hydroplaning was caused by something other than your own actions, I would recommend contacting an experienced accident attorney to discuss the details of your case.” 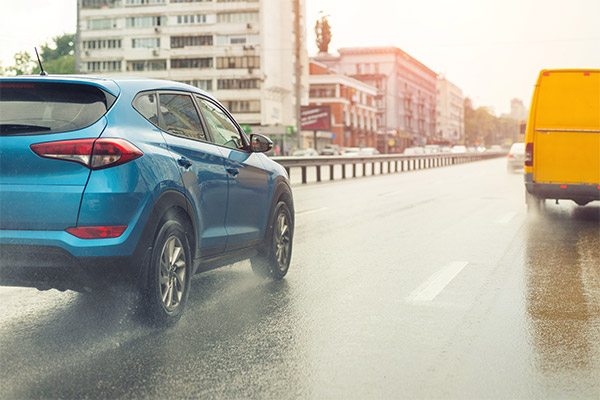