Car vs. Pedestrian Accidents: How to Determine Fault

Pedestrian accident liability can be expensive. Drivers are more frequently found at fault, but pedestrians can be found liable, too, and who ends up paying can get complicated.

Car vs. pedestrian accidents usually cause more damage to the pedestrian than the car, but that doesn’t mean the driver is always liable. A pedestrian can be at fault when hit by a car. There can also be outside factors, like condition of the road or its markings.

Determining pedestrian accident liability, whether full or partial, often involves not only determining who had the right of way, but who exercised proper duty of care.

The increase in distracted driving tied to the increase in technology in cars, is a major factor in the increase, but not the only one in car vs. pedestrian accidents. Distracted pedestrians are a factor too, as well as things like poor street design, weather and time of day.

Injuries to a pedestrian hit by a car can be severe and costly. Drivers are more frequently found at fault, but determining pedestrian accident liability can be difficult.

How to Determine Fault in a Car vs. Pedestrian Accident

Sometimes it’s obvious who was at fault in a car vs. pedestrian accident, particularly if the driver breaks a rule of the road, like speeding, running a red light or stop sign, passing a stopped school bus or ignoring a crossing guard.

Pedestrians can be found at fault if they step in front of cars that have a green light or dart into traffic from between two parked cars, or take some other action that a driver can’t avoid.

But many times, fault isn’t as easy to determine.

Drivers and pedestrians both have a “duty of care” when they’re sharing travel space. This means following the rules of the road as well as using common sense and paying attention. For instance, even if someone is breaking the law by jaywalking, that doesn’t mean the driver has a right to hit them.

Determining pedestrian accident liability often relies on duty of care as much as whether someone was violating traffic rules.

In cases where pedestrian accident liability isn’t clear, it’s a good idea to hire an attorney, who can investigate fault, from getting a court order to look at someone’s cellphone records to see if they were texting while walking (or driving) to determining whose job it is to maintain the roadway has liability.

In some car vs. pedestrian accidents, both the driver and pedestrian share the fault. How this is determined, and what degree, depends on which state the accident happens in.

Most states have “comparative negligence” laws, which means that the negligence of each party in the accident is weighed. In some states the proportion of damages you can collect is reduced by the amount of negligence it’s determined you have. In other states, you can be awarded damages if your fault is less than 50%.

In the 12 no-fault states, each person in an accident is responsible for paying for their own injuries and damages. In some no-fault states, the driver’s PIP (personal injury protection) insurance will cover costs for an injured pedestrian, even if the pedestrian is at fault.

Four states have “contributory negligence,” which means if there’s any negligence at all on your part you can’t collect damages.

What Happens if a Pedestrian Caused an Accident?

A pedestrian who is found to be at fault in a car vs. pedestrian accident must pay damages. That includes their own medical expenses and damage to any of their belongings, as well as damage to the vehicle that hit them, and any injuries to its driver or occupants.

It may be covered by their auto insurance policy, though many policies don’t have this provision. While their health insurance may cover their own injuries, it’s possible they’d have to pay damages for the vehicle that hit them out of their own pocket.

If the pedestrian lives in a no-fault state and has PIP, it will cover their injuries even though they weren’t in a car. The driver’s PIP, in some states, may also cover damages, if a pedestrian was at fault.

If the pedestrian is at fault and there is damage to the car, or injuries to its driver or occupants, they can sue the pedestrian. The costs may be hard to recover, however, if the pedestrian doesn’t have insurance that will pay.

Drivers with uninsured motorist coverage also may use it, in most cases, to cover their costs if they hit a pedestrian who is at fault and the accident isn’t covered by the pedestrian’s insurance.

When a Pedestrian Causes a Nearby Accident

Though 90% of car vs. pedestrian accidents involve one car hitting the pedestrian, a pedestrian can also cause an accident that results in a chain reaction involving more than one car.

For example, if a car, swerves trying to avoid a pedestrian, then collides with another car, the pedestrian can be found at fault. Determining levels of liability, however, can be more difficult since there are more vehicles involved.

The same insurance coverage situations as those with one car and an at-fault pedestrian apply if the pedestrian is found responsible for the “first harmful event,” meaning the first event that results in any level of injury or damages.

So, if the pedestrian caused the first injury or damages in a car hitting another car, the pedestrian could be liable for both cars’ damages. If either of the other drivers bears some level of liability, then the situation can get more complicated, depending on the level of fault assigned each participant.

Pedestrian car accident injuries are often severe, even if the car isn’t going fast. There’s little defense for an unprotected person when they are struck by several tons of steel. The car and its driver, in most cases, don’t sustain much damage or injury.

The pedestrian’s costs can include more than just medical bills. Costs can also include:

Given the complications that can arise in a car vs. pedestrian accidents, pedestrians and drivers involved should consider hiring an attorney experienced in investigating fault, dealing with insurance companies and finding ways to get compensation. 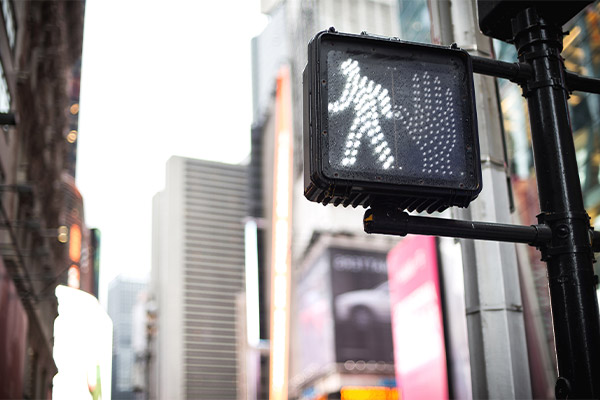