Who Is at Fault in a Car Accident When Backing Up?

Drivers spend less than 1% of their time backing up, yet this basic maneuver accounts for around 25% of all collisions.

With such a high rate of collisions, you would think the rules determining the right of way would be clear and explicit, but as you'll see things get murky when a car backs up into another car.

Usually, when we think of horrific car accidents, we envision high-speed, frontal impacts. However, backing up accidents, most at less than 10 mph, can be pretty severe, injuring over 12,000 people a year. Typical injuries include bruising, whiplash, and broken bones.

And then there is the blow to your insurance!

Usually, the driver who caused the accident has to pay for damages, which might lead to a spike in insurance rates. However, who’s at fault when backing up isn’t always straightforward. The answer varies by state and local laws that also account for state-mandated insurance policies.

Below we’ll go over some scenarios that illustrate what happens in the other 38 states and who is at fault in a car accident when backing up.

How to Determine Who Is at Fault When Backing Up

You can determine who is at fault when backing up by referring to the right of way.

Whoever did not have the right of way is typically at fault. In most cases, this will mean the car going in reverse, is at fault.

Right of way isn’t a set-in-stone law. It is a concept that facilitates traffic flow. If you have the right of way, you’re clear to continue driving. Sometimes the right of way is obvious: cars yield to pedestrians at stop signs. Other times it can be murky. If three cars pull up to a four-way stop sign in unison, who goes first?

The law doesn’t really grant the right of way. It only states when one must yield it. This is why it can be difficult at times to determine who’s at-fault when driving in reverse, especially in parking lots where the majority of backing up accidents occur.

Parking lots may seem pedestrian-friendly, but traversing one can be quite risky, especially during the holiday season. According to the National Safety Council (NSC), insurance claims spike on Black Friday and remain elevated throughout the holiday shopping season. It’s hard to stay atop your blind spot when the parking lot is crammed with eager, aggressive shoppers.

Most backing up accidents occur in parking lots, driveways, or squeezing into a tight parallel parking space. Fortunately, there are often witnesses in the area who can attest to what happened. A credible witness can provide an unbiased viewpoint and help determine whether you, or the other driver, is at fault.

Scenarios: Hitting Another Car While Reversing

Before backing out of a parking spot, drivers must make sure no cars, objects, or pedestrians are in the way. This is the responsibility of the parked car, and they should do this well before releasing the brake pedal. Usually, if two cars get into an accident and one is parked, the moving car will be held responsible.

We’ll go over some instances where the parked car may be liable below. Try not to be too lax when backing up. Even if you visit the same places each day, it’s wise to check your mirrors and blind spots for obstructions before reversing.

Backing Out of a Parking Spot into a Parked Car

If a car backs out of a parking spot into a parked car, the moving car is typically at fault. These cases are pretty straightforward. If one car remains parked during a two-car collision, the moving vehicle will have a hard time arguing they did nothing wrong.

The moving car should notice the parked car in time to avoid impact. Sometimes, the parked car may be at fault if parked illegally, particularly in a spot that’s hard to see.

Backing Out of a Parking Spot into a Moving Car

This case isn’t always as clear as the one above. Once again, parked cars have an obligation to check mirrors and blind spots before backing up. If a parked car backs into a moving car, the parked car is usually at-fault.

The car in the thoroughfare has the right of way. Typically, they’re not held responsible if a parked car reverses into them. However, if they were speeding or exhibiting negligence, they could also be held accountable for a portion of the damages.

Two Cars Backing up at the Same Time

This can happen when two drivers attempt backing out of their parking spaces simultaneously. Neither truly has the right of way. However, they’re still obligated to check and make sure they have a clear path to reverse. If they’re both reversing, they do not see each other, making them both responsible. These cases can get complicated quickly, so speaking to an attorney may help clear the fog and reveal your best options.

Is the Driver Reversing Always at Fault?

The driver reversing is usually at-fault, but there are a few exceptions. Even if a driver has the right of way, they’re expected to remain vigilant and avoid collisions where possible. If a driver notices a reversing car with plenty of time to stop but chooses not to, they could be held responsible for a portion of damages.

Here are a few more instances where the driver may be liable for damages, even if they had the right of way.

Speeding – For over two decades, speeding has been a factor in more than one-third of traffic fatalities, according to the National Highway Traffic Safety Administration (NHTSA). This is why drivers who speed are usually held liable for a portion of damages after an accident.

Reckless driving – This is pretty much what it sounds like. Reckless driving is driving without regard for others’ safety or property. This includes excessive swerving, weaving, tailgating, driving on sidewalks, and ignoring traffic signs. Reckless drivers can be held liable for a portion of damages when another driver reverses into them.

Negligence – Negligence covers a broad range of actions that show a failure to behave with reasonable judgment. Driving under the influence or while texting or otherwise distracted and the violations listed above could all be classified as some form of negligence.

The National Safety Council offers tips on how to stay safe and avoid collisions when backing up: 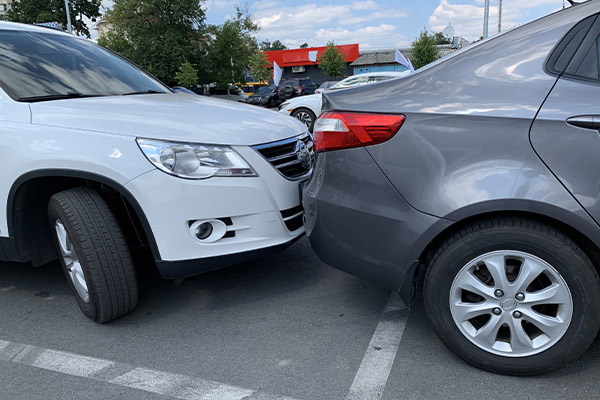