Who Is at Fault in a Three-Car Accident?

The more cars involved in an accident, the more difficult it is to determine who is at fault. Even if one driver caused a three-car rear-end collision, the other two drivers may bear a portion of the fault.

Determining who is at fault in a three-car accident can be difficult, and frequently result in fault being spread among two or all three drivers. Even with a collision in which a car rear-ends a car in front of it, pushing it into a third car, the fault may not lie solely with the first driver. The driver of the middle car or the front car can also be at fault in a three-car accident.

While the rear-end, chain-reaction scenario may seem the most common type of three-car accident, it’s not. High speed accidents on two-lane or multi-lane highways can involve three or more vehicles and are among the most deadly and costly accidents.

But whether it’s a chain-reaction, rear-end collision, or a highway pileup, determining who is at fault in a three-way accident depends on a lot of factors, particularly how each driver was driving.

Who Is at Fault in a Rear-End Collision Involving Three Cars?

The most common type of accidents involving more than one vehicle are front-end collisions, which make up half of all multiple-vehicle crashes. But rear-end collision come in second, comprising nearly one-third of all reportable accidents involving more than one car. When it comes to drivers and passengers being killed or injured, they’re also the second-most common type of accident after head-on collisions. Most drivers who’ve been driving for a while have been involved in, or seen, a chain-reaction rear-end collision. A line of cars is stopped at a traffic light, road work site, or for some other reason, and a car plows into the last stopped car, causing a chain reaction. While it may seem common sense that the driver of the rear car is at fault, that’s not always the case.

When the Car at Front Is at Fault

The car at front can be at fault in a three-car, rear-end chain-reaction collision if the first driver stops unexpectedly and the cars behind don’t have time to react. Even if the first driver stopped for a good reason – to avoid an animal or object in the road, for instance – they can still be found at fault. If they are distracted or swerve to avoid an object thrown from or falling off another car, the driver of that car may be partially responsible, but the driver who swerves or stops still may be, too.

When the Middle Car Is at Fault

Speeding, following too close or distraction can all be reasons the driver of the middle car may be at fault in a three-car crash.

The middle-car driver may also be at fault if they’re distracted – they look down at their phone, or in the mirror, or at their cup of coffee – and don’t notice until it’s too late that the car ahead has stopped. If the middle car hits the front car because of driving too close, or distraction, and the car behind them can’t stop either, the middle car driver may be at fault.

When the Last Car Is at Fault

Who Is at Fault in a Three-Car Chain Reaction Accident?

Aside from rear-end collisions, there are many other ways three cars can be involved in an accident.  One driver may cause the accident by crossing the center line, or cutting off a car traveling in the same direction. That car hits another or causes it to swerve, causing a chain reaction with other cars. But even though one driver kicked off the accident, the other drivers may be found at fault, too, depending on how they were driving.

Determining fault in a three-car – or more – highway accident can be complicated even though the action of one driver likely set it off. If others involved were speeding, following too close or distracted, they too may be found to have some fault.

Weather conditions can also play a part in multiple-vehicle collisions. Heavy rain, fog, ice and snow can cause cars to collide, rear-end each other and more. Drivers may still be found at fault even in horrific weather if they’re not driving safely enough for the conditions.

Who Decides Fault in a Three-Car Accident?

More than 94% of car accidents are caused by human error, usually by a driver, according to the National Highway Transportation Safety Administration.

Fault in a three-car accident is determined by insurance companies the same way it is in accidents involving any other number of vehicles. Insurance companies do an investigation, using police reports, interviews with those involved, reviewing medical records and state driving laws and more.

The general factors that determine fault are:

Drivers have a duty to be responsible, drive with caution and take reasonable measures to avoid accidents or injury to others. A driver not meeting that standard is negligent, and if the negligence caused the accident, then that constitutes fault.

While that may seem clear, deciding fault and how much compensation you may get isn’t always that simple.

Most states and Washington, D.C. are “at-fault” states, meaning the driver, or drivers, found at fault is responsible for paying damages, including medical bills and property damage, for the other drivers. Most of the at-fault states have some form of “comparative negligence,” which means drivers can argue that other drivers involved in the accident were partially at fault, and the cost may be split.

In the 12 no-fault states, each driver is responsible for their own damages, but drivers may find their insurance company is not compensating them fully because the insurer has determined fault on the driver’s part.

Factors that help determine fault are major driving violations, like speeding, driving under the influence and distracted driving.

But even smaller violations may affect how you are compensated, even if you’re not at fault or live in a no-fault state.

For instance, you may not have been the at-fault driver in a three-way collision, but also may have not been wearing a seatbelt in a state where it’s required by law. The insurance company may not compensate you fully for your injuries, because you were partially responsible by not wearing a seatbelt.

What to Do After a Three-Car Accident

No matter how the accident occurred, you can help your case at the scene by following these tips:

If you are in a three-car accident and believe you are not at fault, feel uncomfortable dealing with the insurance company or believe you are not being compensated properly, a personal injury attorney can help. An attorney isn’t only useful if you plan to file a lawsuit. Attorneys who specialize in accidents know the ins and outs of determining fault and how to deal with insurance companies. 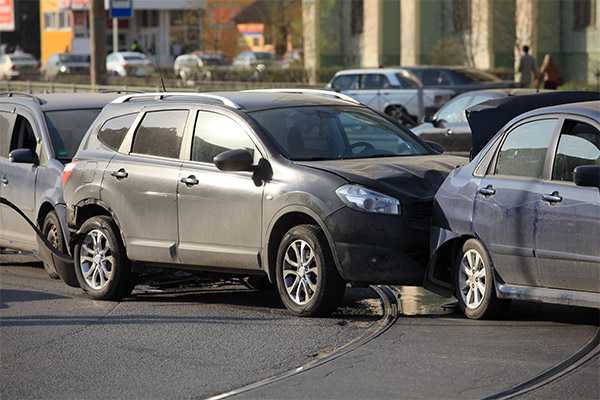 Home » Car Accident » Fault » Who Is at Fault in a Three-Car Accident?