Statute of Limitations on Car Accidents

After an accident with property damage, injuries, or even death, there are deadlines for filing claims or lawsuits for survivors seeking financial justice. Typically called the “statute of limitations,” these deadlines vary by state, and must not be missed.

If you are the victim in a traffic accident, you have assorted options at your disposal. Among these are making a claim against the driver who caused the collision, or even bringing a lawsuit against others who created the conditions that led to the crash.

How Long After a Car Accident Can You Claim Injury?

State law identifies an injured person’s time to file a lawsuit or make a claim against an at-fault driver or contributing actor. The length ranges from one year (Kentucky, Louisiana, Tennessee) to six years (Maine, New Jersey, North Dakota). Most states, however, fall into the two-to-four-year range.

Before we leave the topic, however, we must add this: It depends. Consider the following from Adam Zayed, whose Illinois law firm is based in Joliet. In certain circumstances, the time limitations for filing a personal injury claim stemming from a motor vehicle accident can either be shorter or longer than two years.

“For example, when the defendant in the motor vehicle personal injury claim is a state or local government entity or employee, notice of the claim must be filed within one year of the date of the accident with the state Attorney General and Court of Claims,” Zayed said. “Filing this notice is mandatory and preserves the party’s right to file the lawsuit against a government entity or government employee.”

Minors also get special consideration. With few exceptions, where a minor sustains injuries from a motor vehicle accident, the two-year statute of limitations does not begin running until the minor turns 18.

How Long After a Car Accident Can You Sue for Property Damage?

States also limit the time available to file a claim or bring a suit for property damage, ranging from one year (Louisiana) to 10 years (Rhode Island). Most states set their deadlines at 2-6 years.

What Is the Statute of Limitations on a Car Accident?

For any area of law, the statute of limitations sets the deadline for executing a legal action. In the case of civil law (one individual suing or bringing a claim against another individual or business or agency), this means filing the proper paperwork with the clerk of court in which the case will be heard.

But wait. In car accidents, the clock does not necessarily start ticking at the moment of the incident. Instead, it begins when the plaintiff should reasonably have become aware of the injury or property damage. For instance, you’d probably notice a broken leg before the EMTs arrived. But the severity of soft-tissue injuries, including whiplash, might not manifest for several weeks.

There might be other reasons for not making a claim right away. Your passenger door is crumpled by a distracted driver in the grocery parking lot. Feeling generous, you agree to the perpetrator’s proposal to accept payments for your damage, rather than send his insurance premiums soaring. Three months pass, and the payments stop with nine to go. You’ve eaten into your allotted statute of limitations time, but all may not be lost.

Statute of Limitations on Car Accidents by State

Statutes of limitations can vary widely by state. Here’s the breakdown.

What Happens If You Try to Sue After the Statute of Limitations?

States adopt laws limiting the amount of time someone must bring a claim or file a lawsuit, not to be harsh or cruel, but in the interest of serving justice.

For openers, you can’t simply nurse a grudge and otherwise do nothing for an unlimited amount of time. Yes, revenge is a dish best served cold. But when it comes to lawsuits, another maxim applies: Justice delayed is justice denied.

“If that deadline is missed, there is very little a person can do to recover damages in Virginia,” says Norfolk-based attorney C. Arthur “Brother” Rutter III. “Very few exceptions apply, so we encourage people to see a medical professional after an accident to be thoroughly evaluated.”

“Generally,” Joliet’s Zayed says, “if a party misses the statute of limitations deadline, this will result in the consequence of a lost opportunity to recover compensation for their injuries sustained in the crash. If the statute of limitations deadline is missed, the claim may still be filed, but the defendant and their insurance company will almost certainly move to dismiss the case, and the Court will surely grant this motion.

“Additionally, a client waiting until the last minute to file their case can provide other issues with their claim, including inadequate time to investigate the claim, witnesses and parties involved having an unclear memory of the case, and limited time to preserve pertinent evidence.”

In other words, you can’t just squat on your rights and expect them to be waiting when you get around to it. Justice requires diligence and energy.

Additionally, as Zayed notes, the passage of time means witness memories fade, or move without notice. Evidence and vital records can go missing.

“If you blow the statute of limitations,” says attorney Adam Rosenblum, with offices in New York and New Jersey, “your claim is barred forever.”

There are caveats, Rosenblum says: “If the only person who stands to benefit from a wrongful death claim is a child or minor under 18, New York allows the claim to be ‘tolled,’ or delayed, either until the minor turns 18, or until a legal guardian is appointed that can bring the claim for the minor.

“However, if there was already a parent or guardian appointed for the minor at the decedent’s time of death, the statute of limitations would remain as is.”

So what happens if you try to sue after the statute of limitations? Nothing. The court will — must — reject your claim.

Other Car Accident Deadlines to Know

The statute of limitations is not your only concern. Other deadlines loom.

How Long Do You Have to Report a Car Accident to Your Insurance?

The time allowed for reporting a traffic accident to your insurance company varies by policy. You may review your policy or contact your agent for information.

In Arizona, for instance, “Contractually, policies could have language in which the carrier could deny a claim if it’s reported late that somehow affects the ability to investigate the loss and/or prejudiced the carrier,” Rowe says.

The proper answer for reporting the accident is: The sooner, the better. Especially if you’re hurt. As New Jersey’s Michael J. Epstein notes, “An injured person should alert his or her insurance company immediately so that it can cover medical expenses.”

How Long Do You Have to File a Police Report After a Car Accident?

Once you’re involved in a traffic crash, the forms keep coming. Another one that must be filed is a police report. Again, the deadlines vary. Florida, for instance, requires a Florida Traffic Crash Report — Long Form to be filed within 10 days of the event.

Typically, law enforcement investigators file reports from information gathered at the scene. If no official investigation occurred, as a driver, you have limited time to submit a report to the proper authorities.

In most states, the lack of an official accident report will not prevent you from filing a claim with your (or the other driver’s) insurer. But lack of documentation will slow the claims process.

How Long Do You Have to File a Wrongful Death Lawsuit?

Losing a loved one in a traffic crash is among the most horrifying events imaginable. And while it’s true that no amount of money can bring that person back, or heal the heart fractured by grief, sometimes justice requires pursuing a lawsuit against those who bear liability for your loss.

The target of your suit simply may be the other driver. The business owner might be liable if the driver was piloting a commercial vehicle. It’s also possible that a company not involved in the collision bears some responsibility: Improperly located signage blocked your view of oncoming traffic, or landscaping installed by a developer impeded your view.

Whatever the circumstances surrounding the tragedy, a statute of limitations will apply. In most states, the deadline for filing is two years from the date of the loved one’s death. But the window in your state may be larger or smaller. 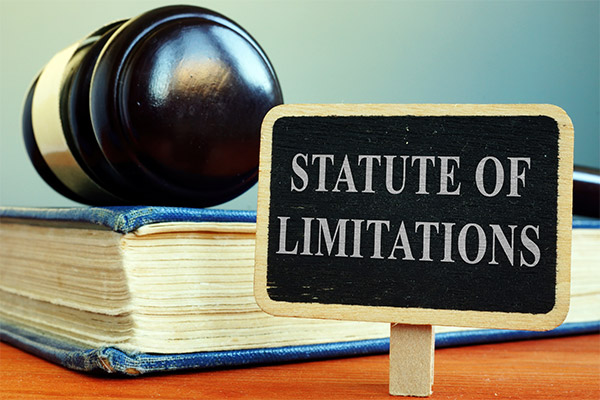