Can I Sue If My Airbags Didn’t Deploy?

If your airbags didn’t deploy in a car accident and you or a passenger were injured, you may have grounds for a lawsuit.

Who to sue and how much of a settlement you get depends on several factors, not only concerning why the airbags didn’t deploy, but also the extent of injuries and whether your attorney can prove fault.

Airbags save lives and prevent injury. However, if they don’t deploy, the result can be devastating and expensive. There are several options to seek a car accident settlement that will compensate you.

Can You Sue If Your Airbags Didn’t Deploy?

You’ve been in a car accident, the airbags didn’t deploy and now you’re wondering if you can sue. The short answer is, yes, you can. The longer answer is that a lot of things depend on whether it’s a lawsuit situation.

Airbags have been required in all cars manufactured after 1999, and they alone save thousands of lives a year and prevent many thousands more serious injuries. Front airbags are designed to protect the driver and front-seat passenger in a frontal collision, cushioning their head and upper body from hitting the steering wheel and dashboard.

If you were not at fault in the accident, you may also be able to get a settlement from the other driver’s insurance company. This doesn’t apply if you live in a no-fault state, like Florida. In that case, your own insurance covers your costs.

Proving that air bags didn’t deploy because of a manufacturing defect is not simple. Several criteria must be met to prove manufacturer liability.

All of these must apply:

As with any accident, any documentation you can provide an attorney is helpful. Call 911 to notify police of the accident, and be sure the responding officer puts in the report that your airbags didn’t deploy.

Get immediate medical help for any pain or injuries. Get copies of the doctor’s report from the hospital or urgent care center where you were treated.

Make note of the details of the accident, including how many cars, speed of vehicles, and more. Take photos of the scene, damage to your vehicle and your injuries. Have someone else take them if you are too injured or shaken up to. Get the names and contact information of any witnesses who can help your case.

Contact a personal injury lawyer as soon as possible. Law firms that specialize in car accidents have experts who can examine the car, determine why the airbags didn’t deploy and who is at fault.

Average Settlement for Airbags Not Deploying

The average settlement for airbags not deploying is hard to determine. Many factors go into how much a lawsuit will be worth, or even if it will succeed.

In general, the average insurance settlement in a vehicle accident lawsuit in 2020 (the most recent year for which numbers are available) was $20,235 for bodily injury and $4,711 for property damage. These are numbers paid by insurance companies, though not auto manufacturers.

Assuming that it can be proven injuries in an accident were caused by an airbag not deploying, the severity of the injuries is the biggest factor the determines how much a settlement will be. Short-term and long-term medical costs, therapy, loss of income, disability, disfigurement, pain and suffering,  all play a role.

More than 90% of suits against car manufacturers don’t go to trial, and many of those are settled, rather than dismissed. Attorneys won’t take on a product liability case unless they think they can win it.

Reasons airbags do not deploy range from defects to human error. Not all reasons are grounds for a lawsuit. Some of the most common reasons air bags don’t deploy are:

A car has sensors that, within one-twentieth of a second, notify airbags they’re supposed to deploy. If the sensors don’t work, then neither does the airbag. This could be a design defect, improper installation, poor calibration or another issue. Any of these can be grounds for a lawsuit against the car manufacturer.

Electrical or computer components also play a part in causing airbags to deploy and if they are defective, it can also be grounds for a lawsuit.

If wiring that is part of an airbag system is severed, it would have to be determined how they became severed. It could have happened during manufacturing, or when the car was being serviced, both possible grounds for a lawsuit.

Defects in the Airbag Modules

If the airbag modules are defective, it could be grounds for a lawsuit against the manufacturer.

The Type of Collision

Dashboard airbags are designed to deploy in a moderate to severe frontal collision – the car hits something head-on. If they don’t deploy in a different type of accident – a t-bone collision or someone backing into you —  it may not be grounds for a lawsuit.

Severity of the Collision

Airbags are designed to deploy in a moderate to severe collision – meaning the car is going more than 10-12 miles per hour when it hits something solid head-on if the driver isn’t wearing a seatbelt. If the driver is wearing a seatbelt, they deploy at a higher speed, generally 16-26 miles per hour. If the car hits something that’s moveable – for instance, a parked car that will move as it’s hit – the speed at which airbags deploy will be higher. They also won’t deploy if the car hits something small, like a squirrel or curb, or bumps through a pothole. If the collision isn’t a moderate to severe frontal collision, there may not be  grounds for a lawsuit.

Many passenger seat airbags automatically shut off if it detects there is a child or person of small enough stature that an airbag could hurt them in the passenger seat. If this is the case, it may not be grounds for a lawsuit.

Lack of an Airbag

Your car or SUV was manufactured with front airbags for both the driver and passenger. Once  there, they should be fine until they deploy in an accident. Once that happens, they have to be replaced.

If you had a previous accident and were told the airbags were replaced, but they didn’t deploy, whoever serviced your car can be held liable. If you didn’t have the airbags replaced after an accident, then you may not have grounds for a lawsuit.

Some states require that cars have working airbags to pass the yearly inspection. But all car owners should make sure airbags are replaced if they deploy in an accident. Some servicers install “counterfeit airbags” that are dangerous and don’t employ correctly, so airbags should be installed by a qualified servicer. If the car’s counterfeit airbags cause injury or don’t deploy, the servicer that installed them may possibly be held liable.

If you bought the car used from a dealer, that dealer could also be held liable if there are no airbags. Holding the seller in a private sale liable may be harder to do.

Do Airbags Deploy When Hit from the Rear?

Airbags are designed to deploy when the front of the car strikes a fixed, solid object. If your car is hit from the rear, the airbags won’t deploy unless the rear-end collision pushes your car into another car or other solid object at a speed that’s sufficient to deploy them. 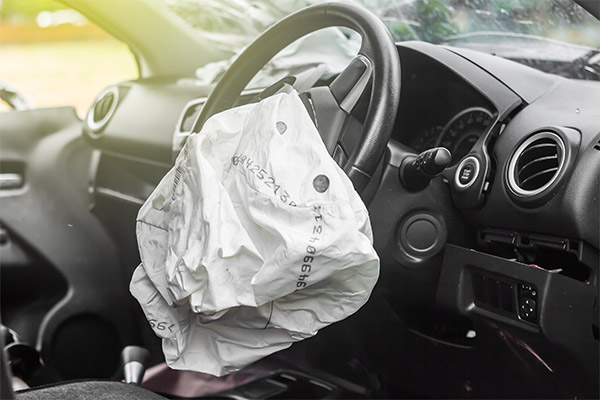 Home » Car Accident » FAQs » Can I Sue If My Airbags Didn’t Deploy?